By Allison Owen Now that I'm back in the swing of things with school and guard, I'm getting back into the usual routine. It's hard to believe that this is my last semester of high school. It's crazy to think that I'll be done with high school in May. In August when Finals week rolls around, I won't have to go back to school two days after Finals. It will be weird, but I won't complain. 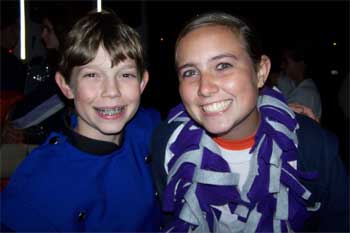 Allison Owen and her brother, Matt.
We've got a good start on our winter guard show and it's also great for me to be spinning in this time between the December and April camps. I'm having a good time and still spinning, so it's a win-win situation. It seems like a long time until April, but once we get into shows for winter guard April will be here before I know it. I have to keep preparing for auditions. To be perfectly honest, I'm pretty scared. It's really hard to have to wait until the end of April to know whether or not I'm going to make it. People keep asking me what I'm going to do if I get cut at the end of April, and I have absolutely no idea. I'm not thinking about that unless it's necessary. I've never wanted to do anything else more than this in my life. I remember all those times I would watch Carolina Crown's guard these past two years on tour and wish that I could do that. Ever since I first saw them in 2003, these people have been my heroes. I have looked up to them in my guard career and wanted to someday be as good as they are. Now that I'm trying to make that happen, I try to remember that they all started off just like anyone else. I think that someday maybe I can be as good as some of the people I look up to. It won't be easy, but no one ever said it would be. This weekend I'm going to get a chance to experience another side of drum corps. I don't have winter guard or anything else, so I'm going to volunteer at Crown's brass and percussion camp. I'm not sure what all that will involve yet, but I'm excited to get to see a different perspective. I know the volunteers work extremely hard to keep a drum corps going, so hopefully this will allow me to appreciate their efforts even more. Check back next week to read about my experience of volunteering at a camp. Allison Owen, 17, is a senior at Sullivan Central High School in Blountville, Tenn. She was assistant conductor at Southwind, and she enjoys dancing, performing, color guard, writing, English, and having fun. She plans on attending Western Carolina University next fall...