Karen Hall is part of a five-member family group that is volunteering at all the DCI World Championship Division II & III shows.

"I marched 1969-1971 with the Kankakee (IL) Blackhawks, where I played a bugle for two seasons and marched flag the last. My mom and dad were very involved in drum corps, and took us out to Boston to see the V.F.W. Nationals. It was awesome. That was the first time I saw that many big corps. In Blackhawks, we only competed with small corps. 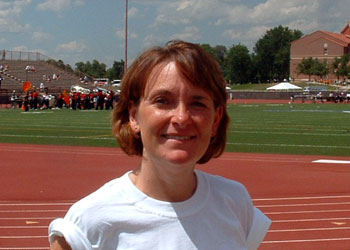 "I followed drum corps until getting married in 1978. I think I saw maybe two shows in ten years. In 1999, my sister-in-law treated us to the DCI World Championships in Madison, and the fire got reignited. Drum corps was still in my blood. Since then, I've attended two more World Championships.

"My youngest daughter, Laura, is a music education major at Illinois State University and she loves drum corps perhaps the most in the immediate family. I think she would have marched in a corps if she didn't have to work during the summer to pay for school. She has a lot of friends who march in corps who also march with her in the ISU marching band.

"My sister-in-law Debbie, Blaiszik lives near Denver and is a fervid volunteer with the Blue Knights. She invited us out to attend these World Championships. Drum corps is Debbie's life. She's one of the most giving people you would ever meet and Blue Knights are lucky to have her. She cooks for camp, she hosts kids, she's a cashier for their bingo operation. Every time we talk to her, she's doing something for the corps.

"Debbie asked us if we would like to volunteer, and we jumped at the chance. This meant sacrificing a 19-year annual vacation with my family to the North Woods of Wisconsin. My dad still loves drum corps, so he was excited for us. Other relatives thought we were crazy.

"We came out her to visit Debbie and my nephew Kurt, volunteer and watch drum corps. We are the ticket sellers and ticket takers all three days of the Division II & III contests. It's a little disappointing not seeing all the corps, but it's been a pleasure working behind the scenes. The people are wonderful and friendly, the spectators coming in are friendly and polite, it's just a pleasant experience.

"We will see the Individual and Ensemble competition and Division I Semifinals and Finals.

"The five volunteers are Debbie and Kurt, my two daughters Christie and Laura, and myself. Christie is a college graduate. She is not a huge drum corps fan like Laura, but she's enjoying bonding with her Aunt Debbie. She's going to spend her 24th birthday on Thursday as a volunteer and she's looking forward to the Division I Finals show on Saturday night.

"I'm having a great time and I would do it again in a heartbeat. I get back more than I put into it. I meet great people and am around hundreds and hundreds of great kids who give up a lot to do what they love to do. Drum corps, in my mind, is some of the greatest entertainment around."