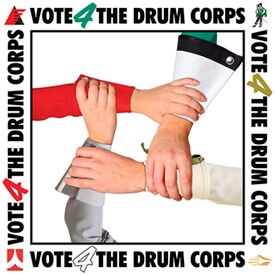 After successfully mobilizing thousands of fans to cast votes of support using the popular "Facebook" social networking phenomenon, four of the world's top drum corps have each received $25,000 grants in an innovative philanthropic program sponsored by the JP Morgan Chase Foundation. The four groups, including Carolina Crown, The Cavaliers, Colts (incorporated as the Legion Aires) and Phantom Regiment, now qualify for a chance at $1 million. Standing out among hundreds of thousands of non-profit groups in the first round, these groups are now up against 100 organizations which qualify for a top prize of $1 million in the next phase of the program. Five runners-up will each receive $100,000. According to Chase, "More than 1 million fans signed up for Chase Community Giving in Round One of the program. Eligible charities included 501(c)3 charities with an operating budget of $10 million or less, serving the general public in designated areas." Calling a passionate fan base into action "Those of us familiar with the drum corps activity are well aware of the loyal alumni, fans and friends who follow the activities of their favorite DCI units," said DCI Executive Director and CEO Dan Acheson. "We hope that these fans will come together in unprecedented numbers to support all four of these outstanding groups in their pursuit of grants which will have far-reaching effects for their communities and those they are privileged to serve." On Monday, Jan. 11, the groups revealed their "Big Ideas" for how they would spend the $1 million grant. These proposals are available on the Chase Community Giving Facebook page. Then, from Jan. 15 through Jan. 22, voters registered with Facebook will have the opportunity to cast up to five votes for any of the 100 finalist charities. Only one vote per charity will count, so DCI and its participating units are encouraging fans to Vote 4 the Drum Corps! in an effort to push each of the four eligible DCI groups into the top spots. "We are excited that one of our own could be the recipient of a $1 million grant and even more thrilled that all four groups could potentially walk away with $100,000 each," said Santa Clara Vanguard Executive Director Jeff Fiedler. "This recognition is far-reaching in helping to introduce the world to the incredible efforts of all of Drum Corps International's units. This is exactly why every one of our more than 40 corps organizations is standing behind these four groups and calling our alumni, fans and friends to Vote 4 the Drum Corps!" View the corps' "Big Ideas" on Facebook: Learn more about the Chase Community Giving campaign. Visit the Drum Corps International Facebook Fan Page.