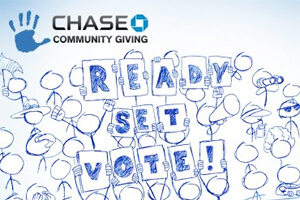 The final days to make your mark in the latest round of the Chase Community Giving campaign are here, and your votes on Facebook can help drum corps earn a significant piece of $5 million.

Chase Community Giving is an annual philanthropic campaign by the JPMorgan Chase Company. Drum Corps International, its corps and affiliate organizations have fared well in previous editions of the campaign, earning $1 million of a total $20 million that Chase has awarded since 2010. In this Fall 2012 edition, organizations have the opportunity to win part of a total of $5 million in grants.

Voting can take as little as two minutes of your time, and can be done in two easy steps. All votes, however, must be placed before Sept. 19 at 11:59 p.m. ET.

1. Add the Chase Community Giving app to your Facebook profile.

2. Search the participating corps names (listed below), or click the following links to get to the corps' voting pages. Then, click the green "Vote" button on their respective profiles to make your selections. 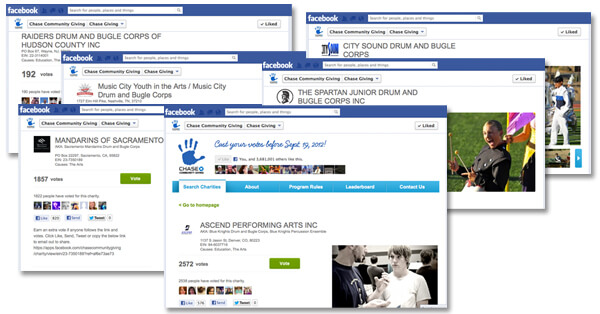 Registered users on Facebook have two votes to place for the groups of their choice. A third vote can be obtained by posting about the campaign on your Facebook timeline. Chase customers also have access to two additional votes to use as they wish by logging into their accounts at Chase.com/ChaseGiving.

Corps like the Spartans, Blue Knights and Mandarins are currently within the top 75 vote-getting groups in the campaign, and can use your help to keep them among the top ranks as the last surge of voting commences.