Three undefeated Division I corps will meet head to head among a field of 11 other competitors during the evening on Saturday, July 8, at the 2006 DCI Indianapolis major event. Thousands of fans will be at the stadium to see the heated competition unfold, but many more will be stuck at home unable to follow their favorite corps live ... until now. After successful tests of live streaming video in Lisle, Ill., and Columbia, Mo., DCI.org has added the evening competition DCI Indianapolis to the list of live streamed events exclusive to members of the DCI Season Pass. 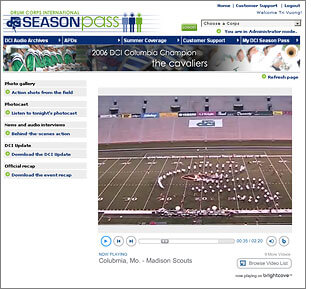 Watch your favorite corps online LIVE this Saturday, July 8.
Originally unscheduled, the video stream of DCI Indianapolis will be an added bonus for Season Pass members. Other locations scheduled for streaming video include Atlanta, Ga., on July 29, and the DCI World Championship Semifinals in Madison, Wis., on Aug. 11. Season Pass members can begin watching the Indianapolis video stream starting at 6 p.m. Eastern time, on Saturday, July 8. Performances of all 14 Division I corps will be broadcast including: Blue Stars, Pioneer, The Magic, Southwind, Crossmen, Capital Regiment, Colts, Glassmen, Carolina Crown, The Cavaliers, Bluecoats, The Cadets, Madison Scouts and Blue Devils. Don't miss this opportunity to see one of the most exciting events of the drum corps season to date. Become a member of the DCI Season Pass and join DCI.org online at seasonpass.DCI.org on July 8 starting at 6 p.m. Eastern time, to watch the event unfold with your own eyes.