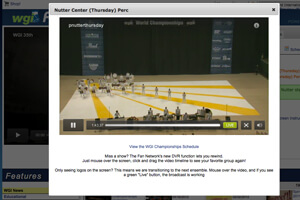 The world's top indoor percussion ensembles are in Dayton, Ohio, this weekend for the annual WGI Sport of the Arts World Championships.

This year WGI celebrates its 35th anniversary, and Thursday, April 19 to Saturday, April 21, the Drum Corps International Fan Network will be there powering webcasts covering all of the competing groups live from Dayton.

Several different pay-per-view and subscription options are available to fans who would like to "tune-in" to the webcasts from their home computers. The schedule is as follows:

Chose and switch between coverage from:

Chose and switch between coverage from:

Learn more about accessing these webcasts at WGI.org