We made it, there and back -- to and from New York City to Massachusetts. It was nothing short of an adventure. After three hours of sleep, Emily and I woke up and began wheeling our suitcases to the nearest subway portal, which would take us to the bus terminal. After arriving at Port Authority, we restlessly waited for our 4:45 a.m. departure bus to arrive. I didn't expect there to be a full bus but at least Emily and I got seats together, I figured that was the most important part considering we're bus sleeping pros. 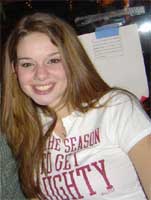