With the sun still shining bright, the action shifted to Diablo Valley College in Pleasant Hill, Calif., for the final event of the three-day Weekend of Champions. While three shows in three days might take its toll on some, the corps continued to improve and, across the board, appeared to perform better as the weekend progressed. 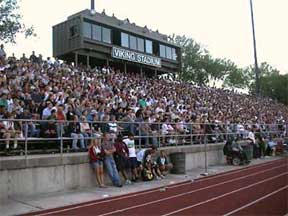 The crowd in Pleasant Hill.
In the late afternoon sunshine, the two Northern California senior corps took center stage as the San Francisco Renegades took on newcomer River City Regiment. Both corps performed well, but in the end the Renegades took home the gold with a 66.15, while the River City Regiment took home a bronze with a 52.45. As the sun continued to set and the shadows crept across the field, the competition shifted to Division II corps Vanguard Cadets, Blue Devils "B" and Fever. Again all performed well and saw scores improve from the previous two nights. The results, however, remained consistent, with the Vanguard Cadets sweeping the weekend gold medals. Their season-high 69.80 bested the Blue Devils "B" corps' 66.85, who walked away with a third silver in as many days. Bronze medallist Fever (59.45) continued to improve as well by shaving away some of the lead of their fellow California Division II competitors Kicking off the Division I contest were the Troopers. Fighting the sadness and distraction of the passing of long-time friend and volunteer Bill Reanier earlier that afternoon, the corps performed admirably under the circumstances, and were inspiring as they continue to improve. Their score of 61.25 was a season high, and provided them with a seventh-place finish. Pacific Crest continued its push forward in Division I. Their sixth-place score of 68.10 helped them keep pace in the hunt for a shot at the World Championship Finals in Orlando this August. To get there, however, they will have to get past a number of other competitors including West Coast rivals the Mandarins and Seattle Cascades. Tonight, however, would see the Seattle Cascades (71.75) again nudge out the Mandarins (69.90) for fourth and fifth place respectively. With the sun fully below the horizon and the lights taking their full effect, the final three corps of the evening were set to shine. While the Vanguard and Blue Devils continue to make great strides and improve, it was the visiting Phantom Regiment that really had the crowd fired up. Regiment director Pat Seidling described the crowds as "fantastic" and said that the audience enthusiasm helped fire them up for each of their two California appearances to date. That fired-up performance not only helped Phantom Regiment score a 79.70, good enough for a second silver medal in as many days, but also helped them close the gap on the gold medallist Blue Devils (82.55). The Vanguard too had an excellent show, and picked up a bronze medal and score of 77.45. At the end of the perfect drum corps weekend, what were most West Coast fans doing? They we starting the countdown until next season, when the Weekend of Champions would return to Northern California.