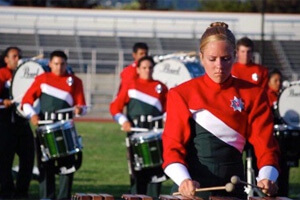 Santa Clara Vanguard (courtesy SCVanguard.org)
As drum corps saluted America in Annapolis, Md. and waited out the rain in Rockford, Ill., the West Coast had its share of drum corps action this past weekend as well. The Blue Devils dominated at both the Corps at the Crest competition in Walnut, Calif. on Saturday and the Western Corps Connection in Riverside, Calif. on Sunday, earning scores of 76.100 and 77.200 respectively, followed closely behind by Santa Clara Vanguard (74.200 and 74.300). The Academy, Pacific Crest and the Mandarins filled out the World Class competition, each improving their scores on the second day of competition. "Both performances were pretty solid, but we had some shaky moments on the opening night," said Mark Richardson, executive director of the Academy. "After the second day we sort of got our 'sea legs' ... I think the kids at this point are in the groove of being on tour and performing." After the performances, Richardson said that it is back to the practice field for Academy members. "Like any good performer, we expect them to evaluate how they did and think about what needs to be improved. Overall it was positive, but there's an overwhelming sense of just how much work we still have to do," he said. Gold topped the Open Class competition scoring 63.300 and then 63.900 the following day, with Mystikal (61.900/62.300) and Velvet Knights (58.600/61.500) not far behind. Incognito (55.400/56.000) and Impulse (54.700/55.700) rounded out the Open Class competition and were joined by all-age corps SoCal Dream and Kingsmen Sr. Gold Director Donald Flaherty said both shows were well attended and the audience responded well to the corps performances. "We had two pretty solid shows," he said. "The second show was better than the first, so we're going in the right direction." Flaherty said that his corps has a lot of young members, many who had never seen a drum corps or performed with one before, but their nerves soon turned to excitement. "We had a lot of rookies who were really nervous but they actually had an absolute blast performing," he said. "They really loved the whole experience." Even with two competitions in two days, the Blue Devils found time to work with other musicians by hosting the System Blue SoCal Drumming Camp, a two-day opportunity for drummers to focus on snare drumming technique while working with Blue Devils staff and performing members and getting an inside look at corps life. The Blue Knights and Troopers also came together last weekend to host Rocky Mountain Rendezvous, a preview performance and picnic at Englewood, Colo. High School on Saturday. View a complete recap of scores from the California events. View the DCI Tour schedule to find upcoming DCI Tour events on the West Coast.