So this last weekend, I once again got to escape the cold weather by flying out to the West Coast for camp. As the norm has become, I generally try to book the earliest flight, which is usually right around 10:30 a.m. Since not many people feel the need to be in town that early, I will take the cab instead of waiting a couple hours for the bus to show up. I found out this time that at the January camp, me and another Joe were taken by a cab driver. He charged us about $35 when it should have been closer to $15, but what can you do? So after I found that out, I wondered around the hall until I found an open door to sit everything down. As the ambition and craving rose in my body, I felt a need to find a Jamba Juice. 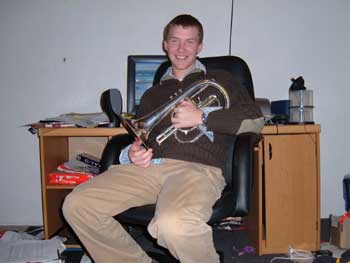 Joe Smith
Since I'm not from California, I don't exactly know my way around the place. So I wandered and I kept track of time, and it took a lot longer than I thought it would. After I wondered for a bit in one direction I found out that it only seemed to be leading to the freeway, so I doubled back and headed down another street. I had only one advantage: The street names were easy things to remember, such as Scott or Walsh, instead of some crazy name like they have around here. It felt like I had been gone for a long time when it had only been like
30 minutes, and as the time slowly crept by, my ipod decided it would freeze. I no longer had any music to listen to, which seemed to be good, because then I really started to realize what was around me. After awhile I found a gas station with ridiculously high gas prices (at least for me), and a pay phone with a phone book dangling from it. It took me at least five minutes to find the Jamba Juice listing. After another 45 minutes of wandering down Scott, I finally found El Camino Real, and as luck would have it I turned the wrong direction, but it didn't take very long to figure it out and get back on the right path. So I kept wandering down the street, wondering if I would ever find the place. Finally at a red light I spotted the store just on the other side of the street in a small stripmall. I was extremely happy that I had finally found what I had been craving for the last month. I glanced at my watch and was amazed to find that it took me over an hour and a half to find this place. It was a great adventure to start a great weekend. Once rehearsal started Friday night, I stood in horn arc and I realized that I had just fallen in love with drum corps all over again, and let me tell you, that it is a wonderful feeling to have. The weekend ended quite well, too. I found out that I would be the mellophone alternate for the time being, which is something I am definitely willing to deal with since this is my dream show. Since my flight didn't leave until 2 p.m. on Monday I was allowed to stay at the corps hall, since I don't really know anyone in the area (have you noticed I try to spend as much time out West as possible?). That night I was asked by an alumn to help him and one of our great tour directors to move a new television into his apartment. Talk about an interesting event. All worked out well, and the television worked very wonderfully, we found out afterwards. I went back to the hall I had the opportunity to watch the 1991 and 1994 shows, which I had never seen before, and then I proceeded to spend the night freaked out after I was told by the alumnus and Dan
Vannatta that I shouldn't worry if I hear noises. All in all I had a wonderful weekend and I can't wait to do it all again on the March 4.