Interlude is a section of DCI.org dedicated to periodically telling the longer, more in-depth stories of the drum corps experience. If you have a longer drum corps essay that perhaps metaphorically relates to larger life, this is the place for it (writers seeking an online clip, here's your chance). Send your completed essays, along with a brief bio and even a picture (and your own e-mail address, if you so choose), to content@dci.org with the subject line "Interlude." We look forward to hearing from you! Christopher John Madaio, a euphonium player with the Boston Crusaders from 2002-2004, sent this essay in. In just over five months. the Drum Corps International's 2004 season will commence, bringing around 100 astounding corps to the field of competition. There are unquestionably many similarities between these groups, especially in Division I. They all have a brass section, a drum line, a color guard, a food truck, amazing volunteers, and a staff of teachers determined to make them the best. They all perform shows for screaming fans and live together for two and a half months. But what makes some corps stand out from the rest? What does it mean to be a member of a top-six Drum Corps International finalist such as the Boston Crusaders? 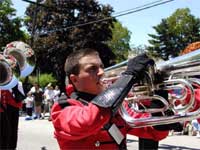 Christopher John Madaio
The Boston Crusaders are truly defined by the mentality and beliefs of the members OFF the field of competition. Although a great performance every night is obviously a goal for the drum corps, the chemistry and work ethic of every person is a far higher priority. Each member of the drum corps exudes a sense of respect for every aspect of this exciting activity. We have only the highest opinion of any other group who work hard to achieve a goal. A hard work ethic and the determination to succeed are two of the aspects that signify a Boston Crusader. Members for the corps are selected based on the willingness to work hard and their ability to be taught, not necessarily their natural talent on the equipment. The staff knows that a member who will work past the limits of their peers and absorb every nugget of information from the teachers is just the person that stretches the limits of the activity. But it is not always easy. A famous man once said, "When the going gets tough, the tough get going." This quote rings true to every member of the Boston Crusaders. Throughout the hardest and hottest times of the summer when it feels impossible to go on, there are 134 other people standing right there, side by side, with their toe to the line, and it is then when every member finally realizes it. But most of all the Boston Crusader believes in the sanctity of the uniform and the heritage it symbolizes. The customs and traditions that surround the uniform and observed not out of obedience but instead over love. The uniform is so much more than a piece of cloth that makes every member look the same. To the Boston Crusaders, it symbolizes 64 years of performers just like themselves who have pushed past what they previously thought they could do, to achieve something that will last a lifetime. The Boston Crusaders uphold traditions and wear the uniform with the utmost pride, because the past family of alumni makes the corps what it is today The Boston Crusaders are an incredible organization because it sets high standards for its members to encourage one another to achieve. There is no delineation between rookies and veterans, no divisions between the sections, and no fear of the staff. Each member truly loves one another because they all push each other to become better performers and better people. Through the infamous Texas and Florida heat, through sickness, and through bus breakdowns, every member looks out for one another like they are brothers or sisters. So of course it makes sense how each person in the corps relies on one another to pull them up from the point whence they cannot pull themselves. Drum corps is not a sport where one person can sit on a bench all season and not participate. The Boston Crusaders do not attempt to hide the weaker players in the back of the drill. This corps nurtures a tight-knit group of performers who encourage and motivate one another to reach their full potential. Even the staff is part of this tight kinship. While some teachers rely on intimidation and drill sergeant routines to scare their members into learning, each member in the staff of qualified teachers on the Boston Crusaders is accessible and multifaceted in his instructing techniques, while still maintaining the educational atmosphere and an air of respectability. While many corps directors are simply logistics managers and do not interact with their members, the Boston Crusaders again prove different from the standard. The executive director believes in the value of the personal connections which are formed through a summer of sweat, blood and tears that every performing member, staff member and volunteer feels in every bone of their body. Not only does this director know everyone in the corps' names, he knows their pets' names too! He truly cares about the chemistry of the organization and what experience the members are having compared to how competitively the corps is currently doing. The volunteers and alumni are an equally vital facet to the family of the Boston Crusaders. Each member of the corps knows the names and stories of all the volunteers, most of whom are not faithful band parents. These volunteers generously give of their time and talents to further the educational opportunities of the youth members. The history and large base of supportive alumni are also a key part of the Boston Crusader beliefs and traditions. It is certain that in 30 years this drum corps with not only be active but be stronger than ever because of the alumni who return every year to assist financially and logistically with the day to day actions of the drum corps. I know that when I age out in 2006, I will have created such a bond with my fellow members that I will return every year to Lynn, Mass., for our home show (and cheer for "Conquest") and even sit front row at DCI finals! I also know that in 30 years if I ever need help with my life or just someone to talk to, I will have just the person. We create the types of personal connections at the Boston Crusaders that span the course of time. What it means to be a member of the Boston Crusaders can be wrapped up in the four words our director told us before the 2003 season: Think, believe, dream, dare. The ability to challenge yourself to do things you never thought possible and having the resolve to attain these goals and helping others in our united family to do the same, no matter how difficult it may seem, truly defines a member in the Boston Crusaders.