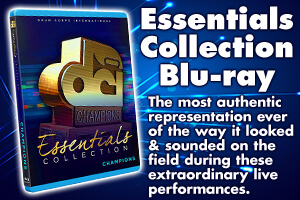 Watching the new Essentials Collection – Champions on Blu-ray is like entering Dr. Who's TARDIS and being transported back to the live performances, silently hovering over the field with the door open and experiencing drum corps like it's never been experienced before. Not a "Dr. Who" fan? Okay, it's like walking into a time warp and finding yourself in the best seat in the house, seeing and hearing the shows with a clarity that seems even sharper and more focused than when you saw any of the shows live. If you thought the leap from VHS to DVD was impressive, imagine the same improvement in quality all over again. There is no visual fuzziness and the corps sound like they're playing inside your head. For this first disc in the Essentials project, Drum Corps International has selected 12 Championship shows that fans have proven to be the most popular in the entire DCI archive, plus a bonus show from 1973 that has never been available before; all re-mastered to deliver a quality that was unimaginable just a couple years ago. We've assembled the following rundown of the corps featured on this Blu-ray to remind you of these spectacular performances — 13 expertly re-mastered World Championship-winning productions that are "essentials" for anyone's home video collection. 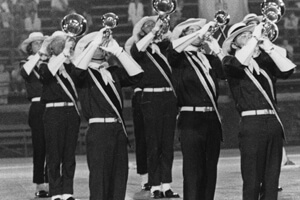 1975 Madison Scouts
1973 Santa Clara Vanguard Shot at Whitewater, Wisconsin's historic Warhawk Stadium, in its original form, this recording had many defects due to aging and the recording technologies of the time. With today's advances in film restoration, Santa Clara Vanguard's very first Championship-winning production looks and sounds better than it did when first recorded. 1975 Madison Scouts From the first year PBS broadcast the World Championship Finals, comes the show that redefined loud and powerful. An endless supply of screaming brass soloists blasted through "Slaughter on Tenth Avenue," "Macarthur Park" and "The Way We Were" with an intensity that was unprecedented and remains unsurpassed. 1984 Garfield Cadets This is the show that revolutionized how we would forever think about visual design. The late George Zingali's masterpiece of flexing forms continually evolving in unexpected fashion coordinated flawlessly with the music from "West Side Story." Fans still look at the sudden company front in "Tonight" and wonder how it all came together. 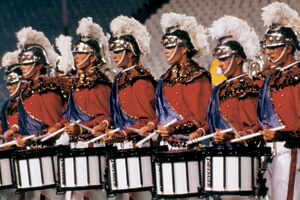 1991 Star of Indiana
1986 Blue Devils Ten years after the corps' first DCI title in 1976, Blue Devils brought back "Channel One Suite" and swept all the captions, just as they did when the piece was played a decade earlier. The unusual and iconic North tenor drums also returned for a bow, and the corps dug deeper into its love affair with the music of Chick Corea. 1989 Santa Clara Vanguard This show, a reprise of "Phantom of the Opera" from the year before, was voted the most popular of all shows in fan polling on DCI.org. With a brass book teetering on exploding, aggressive drumming and the famous disappearing Phantom at the end, the presentation remains everything anyone could want from drum corps. 1991 Star of Indiana "Roman Images" took the music of Respighi and made it sparkle and pulsate as much as the accompanying regal colors. With a roller coaster ride of notes, the mellophones brought the ears to the point of exhaustion. George Zingali's final visual masterpiece—the dissolving and reappearing cross—still shocks and amazes. 1994 Blue Devils The corps' love affair with Chick Corea boiled over with "My Spanish Heart," with the hearts of the fans synchronizing with a throbbing bass drum beat throughout. The corps went undefeated, the first World Class unit to pull that off since 1982.This is arguably just about everyone's favorite Blue Devils show ever. 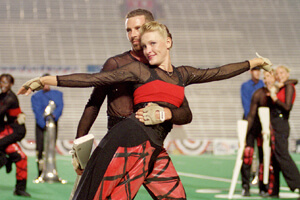 1999 Blue Devils
1996 Phantom Regiment Drum Corps International's first of four Championships to be hosted in Orlando, marked the first tie for the Championship and Regiment's first title ever in DCI history. With a searing delivery of "Defiant Heart—The Music of Dmitri Shostakovich," a new hole was ripped in the ozone layer when all horns reached the big arc at the climax of "Finale from Symphony No. 5." 1999 Blue Devils DCI's second tie for the title was shared by the Blue Devils who performed "Rhythms At the Edge of Time," a production that featured a torrential flood of Latin, Afro-Cuban, swing and other jazz rhythms. An exhaustive musical dictionary of rhythms was created out of the most elemental building blocks of music, resulting in a sonic landscape of riveting showmanship. 2000 Cavaliers "Niagara Falls" captured half of the third tie for the DCI World Championship title, making the Cavaliers the final World Class corps to win playing G-keyed bugles. Undulating arcs crested before plummeting over the falls during a full corps rock-out section, while the famed "diamond cutter" drill formation tried to pry loose the fingers of the thrill-seeking fans. 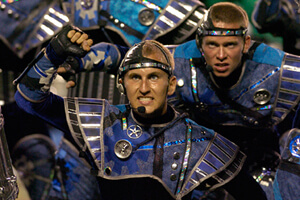 2006 Cavaliers
2005 Cadets The Cadets took all the top honors for "The Zone [dreamscapes in four parts with door]," a masterpiece of surrealism that began with uniforms appearing the same coming and going. The door had a starring role, pulling in members and spitting them out into an alternate reality, the show continually short circuiting our brains. 2006 Cavaliers "Machine" was crawling with robots that were somehow ominous-yet-loveable, with the show saturated with darkness and humor. The visual program was a buffet of elastic drill maneuvers, with musicians passed over the robots and taking on their characteristics. Never has the thought of being assimilated by robotic overlords been such fun. 2007 Blue Devils "Winged Victory," based on large fabric "wings" the corps' color guard introduced in 1982, brought another title to the Blue Devils organization during its 50th anniversary. A gradual introduction of light into the formerly darkened visual palette set the show ablaze with the candlepower of the sun, concluding with a sense of hope and awe. The Essentials Collection – Champions, featuring re-mastered audio in lossless 5.1 surround and video up-converted to high definition, is now available for purchase through shop.DCI.org. Buy the Essentials Collection – Champions today.

The Making of the Essentials Collection