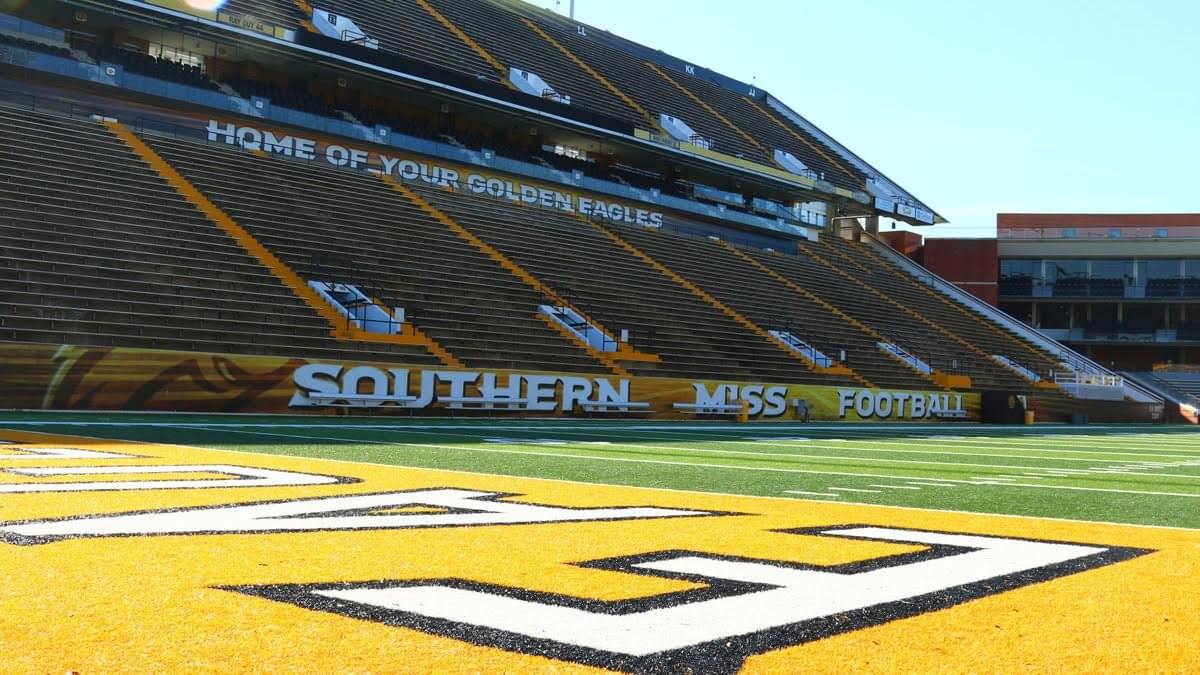 The DCI tour will visit M.M. Roberts Stadium in Hattiesburg, one of two shows to be webcast on DCI Live! Wednesday.Photo by: Drum Corps International

Drum corps fans will be treated to another doubleheader today when events in Hattiesburg, Mississippi and Little Rock, Arkansas are webcast via the DCI Live! streaming video platform. The action kicks off for both events this evening, Wednesday, July 22, at 8 p.m. ET/5 p.m. PT.

PLEASE NOTE: This DCI Live! webcast will be available for viewing on desktop computers, with mobile streaming available exclusively through the DCI.org iPhone and iPad app, or the DCI.org Android app. The webcast can be accessed as part of a season-long subscription package or pay-per-view.

What to Watch: Hattiesburg

• Can the Bluecoats put pressure on the Blue Devils? The two corps have only met three times thus far in 2015, with the Blue Devils winning by a margin of about one and a half points each time. But after slipping behind Carolina Crown at recent events, the Bluecoats need to reaffirm their contention for a medal. A strong run-through would surely boost their confidence heading into the DCI Southeastern Championship in Atlanta on Saturday.

• Last week in Belton, Texas, the Academy pulled ahead of the Troopers for the first time since the 2012 World Championship Finals. The Troopers responded with a resounding victory over the Arizona corps at the DCI Southwestern Championship in San Antonio. Meeting for the first time since last Saturday’s showdown, the Academy will attempt to prove that Belton wasn’t a fluke, while the Troopers will attempt to pull closer to a top-12 spot in what has become a tight race between these contenders.

• Southwind will make its second-ever appearance as an Open Class corps in Hattiesburg, after making its DCI Tour debut on Tuesday in Ocean Springs, Mississippi. Fans will not have many chances to see Southwind in 2015--the corps from Mobile, Alabama ends its inaugural tour on July 26--so be sure to take advantage of this opportunity to see one of DCI’s first-year corps in action as they continue to #growdrumcorps.

What to Watch: Little Rock

• Much like the Bluecoats are attempting to gain ground on the Blue Devils, the Blue Knights will attempt to gain ground on Santa Clara Vanguard when the DCI Tour moves into Arkansas Wednesday night. As recently as Thursday, the Blue Knights appeared to have closed the gap when they posted a similar score to Vanguard at a separate show. But the California corps regained its lead Saturday in San Antonio. The Blue Knights have only beaten Santa Clara once since 1988, and they have the potential to put the pressure on in Little Rock.

• The Crossmen had not beaten the Blue Stars since July 20, 2013, until they did so twice in a row over the weekend. The Texas tour has been good for the San Antonio corps, as Crossmen members closed a two-and-a-half point deficit to the Blue Stars in a matter of days to establish themselves as heavyweight contenders for a spot among the top-12 corps. But the Blue Stars bounced right back on Monday in Dallas and regained the lead. This rivalry has caught fire in the heat of summer and will certainly be fun to watch in Little Rock and throughout the rest of the summer.

• But no rivalry may be hotter than the one between three West Coast corps: the Mandarins, Oregon Crusaders and Pacific Crest. There have been ties both of the last two times all three met at the same competition, and no corps has truly been able to separate itself from the others. With the balance of power swinging back and forth seemingly every meeting between this trio, it’s nearly impossible to predict who will come out on top in Arkansas. In a way, a three-way tie seems like the only fitting outcome.

Who will gain the upper hand in the many rivalries on display Wednesday night? The best way to find out is by watching the competition live, either at the stadium or online via DCI Live!