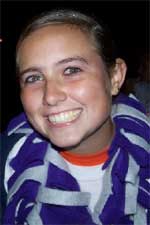 Allsion Owen
I am very glad extreme and inclement weather is not something that is often dealt with in drum corps. Of course we do have to deal with that occasional rainy day or windy night, and maybe that one show with thunder and lightning. However, I've never heard of a drum corps show being cancelled due to an extreme snow or similar weather situation. Much to my delight, our winter guard scheduled six shows this season -- as opposed to last year's three. I was elated to get to perform more, but in the back of my mind I figured something would go wrong and the number of shows would decrease. Unfortunately that little voice in the back of my mind was right. The almighty weather men on our local news stations and the national weather channel declared that it would be a stormy weekend in our area unlike anything this year; but how often are they right? Friday at practice Tommy informed us that there was a very slight chance that the show would be cancelled. On the other hand, it was very unlikely. The only way the show would be cancelled is if the hosting school's administration required that the show be called off. Still, we were told just in case to make sure we could get in touch with each other the next morning. I hadn't been feeling too great this week -- I seem to have caught that sickness that is sweeping across the country -- so I went to bed early to rest for a show day. When I went to sleep, there was not much sign of any form of inclement weather, but when I woke up I was greatly surprised. There was snow on the ground, but not on the roads. It didn't seem to me that there would be any problem getting to and from school or the show site. I also figured that the weather could be completely different in other parts of the area, though. My first indication that something was up was that I could hear my brother downstairs watching television at a little after 8:30. No big deal on a normal Saturday, but he was supposed to be meeting people at school at 8:45 to go to a regional band clinic. I was soon informed that his clinic and concert had been cancelled, as had my show. I was disappointed because I had actually been looking forward to the show. Much like during the summer, I live for show days because I love to get the chance to perform. Also, had I known that the show would be canceled, I could have planned to do other things. As disappointed as I may be, ultimately I got to catch up on some much-needed rest. And everyone knows that in drum corps, a cancelled show does not mean more rest, so I guess I will take what I can get when I can get it. Allison Owen, 17, is a senior at Sullivan Central High School in Blountville, Tenn. She was assistant conductor at Southwind, and she enjoys dancing, performing, color guard, writing, English, and having fun. She plans on attending Western Carolina University next fall...