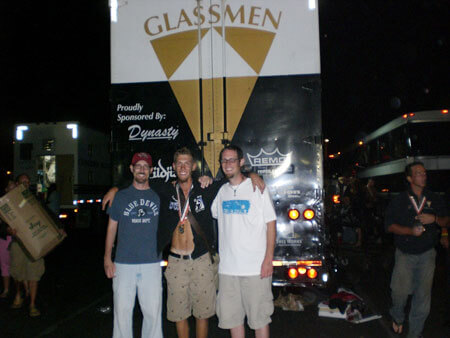 This is my favorite photo from the 2007 World Championship Finals. On the left is my son Jeremiah who started our family in the drum corps activity when he heard about the Glassmen in 1991. He marched as a member of the Glassmen for seven years. His brother Andy (far right) followed in 1992 and marched for eight years. A couple of years later brother Joe (not pictured) joined. He marched for five years with the Glassmen and three with the Blue Devils. In the center is the youngest Falvey brother, Lee. Lee marched one year as a member of the Americanos, two years with Phantom Regiment and is now on his fourth and final year with the Blue Devils.