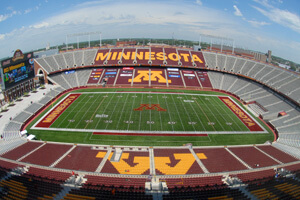 Sun and blue skies greeted fans at the very
first DCI event at TCF Bank Stadium.
Torrential rain, thunderstorms, and a near-tornado swept through TCF Bank Stadium in Minneapolis Saturday, July 17, putting an early end to what otherwise would have been one of the largest drum corps events to take place in the upper Midwest in recent years. Before the start of the event, however, the skies were sunny, and local event organizer Brent Turner said fans were thrilled that an event of this caliber had come to Minneapolis. "Excitement is definitely here with more than 7,000 pre-sold tickets," he said. [The fans] are just amazed that a show of this size has come to Minnesota." Though the competition was cut short, 14 out of the 23 World, Open and All-Age corps managed to get their performances on the field. Open Class corps Racine Scouts kicked things off while the sky was overcast, but still bright. Following were the Colt Cadets and Legends, who wrapped up the OC competition for the evening. The atmosphere began changing considerably as Teal Sound members performed without their shakos, hoping to keep their plumes from getting wet as dark clouds gathered nearby. Then came the first of three weather-related delays, lasting for about 40 minutes. Afterward, Pioneer strolled onto the field as if nothing had happened. The corps' front ensemble even entertained the crowd with a warm-up of Lady Gaga's "Bad Romance." 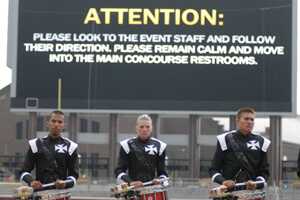 Crossmen percussionists warm up post rain delay.
Pioneer had barely left the field when a second weather delay held up the next scheduled corps, Spirit, for another 15 minutes. The Atlanta corps picked things back up with its latest performance of "Forging an Icon," and then the Crossmen and the Madison Scouts were able to showcase their programs without a hitch. It seemed the show was moving ahead for good as the Colts performed. Drum Major Sam McGinthy said the corps was undaunted by the weather after already dealing with other less-than-ideal situations this season. "It seems like bad weather follows us sometimes," McGinthy said. As the storm seemed to clear and the corps was called quickly to the warm-up zone, members didn't let it faze them. "We got in the zone and stayed relaxed. When the time comes, we have the game face on and go throw down the show." With a shortened window to fit in the rest of the corps performances, after the Colts, a decision was made to run down the rest of the lineup with no breaks. The two All-Age corps from Minnesota, Govenaires and Minnesota Brass, claimed the field to play for their hometown crowd before the Troopers headed into the stadium. 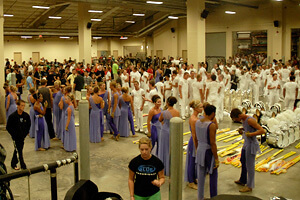 Corps gather under the stands as they wait out the storm.
Troopers brass section members Aidan Ritchie and Ryan Shreeman said their performance, despite the weather-induced chaos, was a good one. "I kind of like it when you get a short warm-up, and then you just go out and throw down. There's no sitting around and waiting. You get to go right at it," said Shreiman. "For me, it was really interesting after waiting so long, thinking the show's not going to happen. But it went really well," said Ritchie, a third-year member of the corps. Once again, clouds loomed and the sky slowly darkened. Blue Knights continued with their crowd-pleasing program, "Europa!" Then came the Glassmen, who would be the last ensemble to perform Saturday night. Though members of Phantom Regiment defiantly took the field to setup for their performance, a crack of lightning set off the third and final weather delay. Stadium officials had no choice but to have corps leave the field and guide audience members out of the stands immediately. When tornado sirens sounded in the nearby area, stadium officials and DCI staff moved everyone out of the concourse and inside, away from windows, to wait out the worst of the storm. 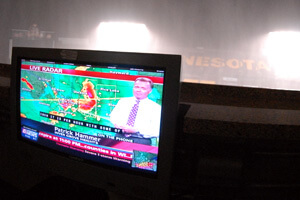 The safety of performers and fans was priority
while Minneapolis was hit hard by Mother Nature.
"It's a pretty intense situation," said DCI Judge Administrator John Phillips as tornado sirens blared outside. "It's for the safety of the kids in the corps and the audience that we got out of the stadium at the time we did. As we saw, the weather can change really quickly." Shortly after 9 p.m. as the torrential downpour continued, it was clear that the rest of the event had to be canceled, though fans tried to stay positive amid the confusion. Greg Zike, a Twin Cities local, had attended with his family members to see their next-door neighbor's daughter perform with the Blue Stars. Even after the weather rained out his very first drum corps experience, he understood what was at stake leading to the cancelation. "I have kids who are involved in sports, and the weather is just something that you deal with, especially in Minnesota," Zike said. Contributing to this report: Ryan Cain, Johnny Gilbert, Chris Weber