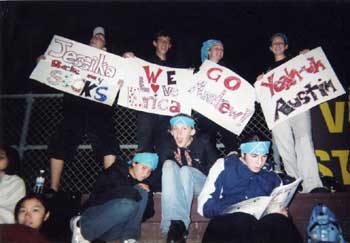 Jessika Filler, a 17-year-old baritone player from Danville, Calif., in her third year marching (she's auditioning for the Seattle Cascades baritone line), submitted this one.

"This is a picture of some of my closest friends and myself at the Vintage Reserve Band Review in Napa, Calif., on Nov. 13, 2004. These are the four kids from my high school that currently march drum corps. "From left to right is Andrew (baritone 2004, Blue Devils 'B' corps), Austin (trumpet 2003-2004 in the Blue Devils 'B'), me (mellophone 2003 in the Blue Devils 'B' and baritone in 2004 for the Magic), and Erica (trumpet 2004 in the Blue Devils 'B'). "We're holding up the signs that were made by our dear friend, Chelsea Strong (trumpet 2003-2004 in the Blue Devils 'B'), and that were held up for us while we were competing with our band. Chelsea is no longer in the band at her school, but came to the competition to support her friends anyway!" Thanks Jessika!
E-mail your Forzato submissions -- and we will get to them all, in time (and we're posting them in the order they were received) -- to dave@dci.org along with where and when the photo was taken. Send some biographical information about yourself as well. We'll give you full credit. Also, let us know if you want your e-mail address included.