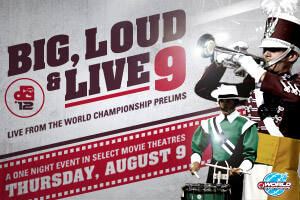 Don't miss your last chance to catch Drum Corps International on the big screen in 2012!

Featuring a live broadcast from the World Championship Prelims at Lucas Oil Stadium in Indianapolis, this event promises to deliver more than four hours of powerhouse performances from the top 15 drum corps along with highlights of corps that will have performed earlier in the day.

Presented by National Cinemedia's Fathom Events and Drum Corps International, this year's live production will be shown in a record 609 theaters across 47 states, giving more drum corps fans than ever before the opportunity to experience this movie theater event.

"The popularity of Fathom and DCI's annual 'Big, Loud & Live' events continues to grow," said Shelly Maxwell, executive vice president of NCM Fathom Events. "These stirring cinema competitions give everyone a front-row seat to watch the most elite marching music ensembles in the world."

Tickets ranging in price from $12.50 to $18, depending on location, are now on sale through FathomEvents.com.

Fiend a theater near you, and buy your tickets today!