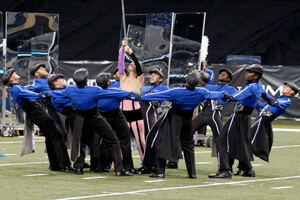 Blue Devils
Though placements remained the same down the lineup, competition tightened among the top corps at the World Class World Championship Semifinals Friday, August 13 in Lucas Oil Stadium. The Blue Devils (98.05) again claimed the first place position — but the second-place Cavaliers (97.25) are now within a point of potentially toppling the current leaders and postponing their quest for a 14th World Championship title. Meanwhile, the 3rd-place Bluecoats (96.50) are in a position to win their first Championship medal and achieve the highest score in the corps' history. Though the Bluecoats increased their score by a small margin from the Thursday Quarterfinals, age-out Erica Simon is confident that the corps isn't losing momentum. "I'm happy with the performance. We're just continuing to progress and I'm OK with that. Bluecoats have never been in this position before and we're going to fight to stay here." 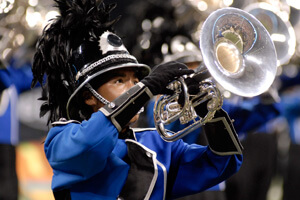 Bluecoats
Simon has been a Bluecoats member for two years, fulfilling her dream to march with the corps since she was 12 years old. "I don't even know how to describe how I feel about tomorrow. It's the last time I'm ever going to do this, and I want to walk away with a ribbon around my neck. I don't know what color will be hanging there, but I'm so proud to be a part of this corps" 17 World Class corps in total competed Friday in Lucas Oil Stadium, with five fielding their 2010 programs for the last time. Crossmen (17th, 80.90) maintained a steady performance level, increasing by a tenth of a point from their Quarterfinals performance. "We've had a wonderful last couple of weeks putting the [final touches] on the show, making everything click right to the very end," said Crossmen Brass Caption Head Aaron Goldberg. "The whole staff is very proud of the members: their hard work, their professionalism, their consistency, and their dedication to not only the show, but to the corps." "As a staff member watching the last show, I think back to auditions watching kids from November to early January and see how far [they've] come as individuals and as a drum corps. It's pretty unbelievable." 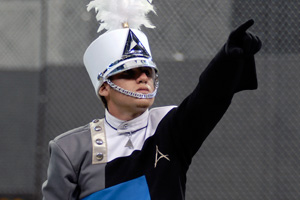 Spirit
Crossmen age-out and mellophone player Timothy Kurtz said he was shaking as he brought down his horn to conclude his final performance with a DCI corps. "Hearing the crowd and our staff just going crazy for us, it was the pinnacle of my life … for all the years I've marched, I think about my first audition. I was just a little kid looking around. That's what flashed through my mind – that first audition. I feel like I just left that on the field – fresh out of high school, 17 years old." Spirit (16th, 81.45) lost some ground in the scores, but fifth bass drummer and age-out Randall Moore thought it was the season's best. "I had an amazing summer, had an amazing performance, and I love the people here," Moore said. "What really made me come back was the staff, and a lot of my friends came back too. I just love the environment here." As an age-out, Moore has a few words of advice for all those looking for an incredible experience in a drum corps: "Just make sure you're happy wherever you go. So many people get wrapped up in the competitive placements when it's really just about having a good time." Color Guard Caption Head Jude Boughton said he couldn't be more proud of both guard members and the entire corps. "With [Spirit] moving back to Atlanta this year, the 'forging of an icon' had some symbolism about getting back to our roots. This is my first year with the corps, so with the show [symbolizing] building the delta back up to what it once was, it was special being a part of that. With the new location and change in uniform, I think it's a great first step in getting back to the Top 12." 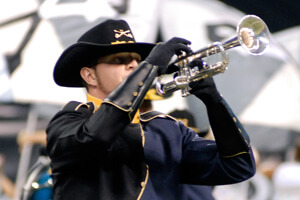 Troopers
Though the judges did not reward the Troopers (15th, 83.35) as highly as on Thursday, many corps members felt they finished on a positive note in the face of an extremely competitive season. "We just did it for each other," said baritone player Mark Baumann. "That's what [the staff] really stressed to us, but I think we would've done that anyway. We weren't thinking about judges, we weren't thinking about audience, we were just thinking about each other, and that made it really special." The Troopers had battled back and forth with Colts and the Academy for much of the 2010 season, and at some points topped them both. As a member of Troopers in 2009 as well as this year, Baumann sometimes thought about the achievement of returning to the Finals like the corps did in 2009. But he also said the Troopers staff reminded the corps that in the end, what mattered most was not the score they got, but how they got it. "Rehearsal is all about getting better than the previous day, and that's what I felt like we really did." 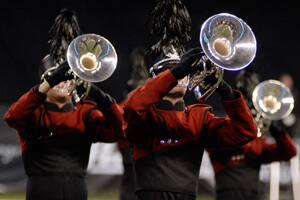 The Academy
The Academy (84.05) kept their score almost level, only falling by two tenths of a point. This was good for a 14th-place finish at the World Class Semifinals, but was also the last time members would perform together in 2010. Snare drummer and age-out Emmanuel "Cookie" Olia said it was a "crazy" season that started out strong, leveled out in the middle, but came together in the end. "Regardless of everything, we just kept getting better and better throughout the whole season, especially the last week. That's when we pulled it around. No one gave up," Olia said. In 13th place for the second year in a row and the fifth time ever (more than any other World Class corps) were the Colts (84.65). Alex Russeau is a sixth-year Colts member with one season of age eligibility left, but he still felt the emotion of the culmination of a summer's worth of hard work together. "Our impact at the end of the closer is the very emotional point that gets the crowd going. [This last week] has been about pushing ourselves and seeing how great we can be in the last two days. And then just enjoying every moment we have together." The Top 12 corps that will advance to Saturday's World Championship Finals Aug. 14 include the Glassmen (12th, 86.50), followed by the Blue Knights (11th, 87.85). This was the second show in a row where the Madison Scouts (10th, 89.20) overtook the Blue Knights, and now only .4 separates Madison from the next corps in the Top 12, Boston Crusaders (9th, 89.60). 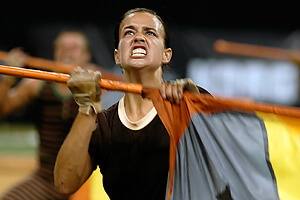 Blue Stars
The Blue Stars (8th, 92.05) remain in extremely close competition with Santa Clara Vanguard (7th, 92.45), still less than half of a point apart. Continuing a surge over the last few days, Phantom Regiment (6th, 92.95) increased its score by more than half a point, driven in part by the continued excellence of its percussion section. "I know it's right after the heat of the moment, but honestly I've been doing this for a long time and that was definitely one of the top three or four performances of a line I've ever heard in my life," said Phantom Regiment Percussion Arranger and Caption Head Paul Rennick. "It was absolutely stellar from front to back: Balance, timing, accuracy, touch. Seriously, it was nails." Taking 5th place for the second night in a row, the Cadets (94.85) are on the verge of breaking 95, with members feeling confident about their Semifinals performance. "I think both days were very successful," said Cadets Director George Hopkins. "They were a little more stable tonight being in here for the second time. After watching field level and asking the kids flat out if they were better today or yesterday, 130 of them said they had a better show [today]. That's all we can ask for. As for tomorrow, there is so much emotion flying on Saturdays, part of our job is to control it. But they'll have a great show. They've had great shows for a couple weeks now." 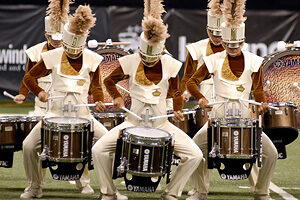 Carolina Crown
Standing just outside of a medalist position is Carolina Crown (4th, 95.35), though the corps is still more than a point behind the Bluecoats. Musically, Crown created an especially loud response from the audience in Lucas Oil Stadium during the opening notes of its show. Once the competitive segment of the night was over, many festivities remained as part of annual Semifinals festivities. Three Open Class Individual & Ensemble (I&E) winners performed in the middle of the field in front of a sizeable crowd. But the highlight of the post-show performances Friday night was the long-awaited performance of the Star Alumni Corps. Comprised of alumni from former DCI corps Star of Indiana and its off-shoot performance ensemble's Brass Theater, Blast!, and others, corps members were dressed in pink soccer jerseys as a nod to the original Star of Indiana uniforms. The alumni corps played music from Star's years on the DCI field, 1985-1993, photos from which were featured on huge backdrops set in an arc across the back of the field. 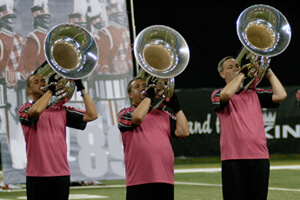 Star Alumni Corps
Corps founder Bill Cook and wife Gayle were in the audience as was former Star director James Mason who currently serves in the drum corps activity as artistic director with the Madison Scouts. "[The Star alumni] have done this on their own and they've concentrated very hard on bringing the essence of Star of Indiana to the field," said Mason prior to the performance of the corps on Friday. "I'm excited as everyone else in the audience to see what they're going to do tonight." As the age-outs from all participating corps made their way onto the field tp be recognized for their accomplishments, the Star Alumni formed a circle around them, serenading the Class of 2010 with "When you Wish Upon a Star." View all scores from this event. Contributing to this report: Ryan Cain, Christina Mavroudis