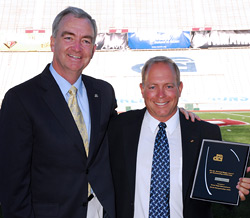 Mark Chambers (R) with Dan Acheson
Prior to the start of the 2008 Drum Corps International World Class Finals, special acknowledgment was given to Crossmen director Mark Chambers as the recipient of the 2008 Dr. Bernard Baggs Leadership Award. Named after the longtime judge and board of directors advisor who passed away in 1998, the Baggs award recognizes the outstanding director of the season as voted on by all World Class directors. "I'm honored," said Chambers just after accepting the award from DCI executive director Dan Acheson on the field of Indiana University's Memorial Stadium in Bloomington. "This is very humbling and exciting for me." The Crossmen marched onto the football field in 2008 for their sophomore year as a Texas-based organization after relocating from the East Coast in the fall of 2006. The group ranked within the top 12 of all World Class corps into the final weeks of the '08 season, and while just missing a spot in the World Championship Finals by less than a half of a point, the corps' 13th place finish is a marked competitive improvement from 2007. "We've had a wonderful year, and a great time doing it," said Chambers. "When the corps met this morning [Saturday, Aug. 9] everyone was really excited, and excited for next year too." Chambers served as the director of bands at Ronald Reagan High School in San Antonio from 1999 to 2007, and his passion for working with student performers is apparent even after switching gears to his role as full-time director of the Crossmen. "It may sound clich?©, but I'd have to say my favorite part of my job is the corps members," he said. "You see the amazing things that they accomplish in rehearsals and performances, and there is not a greater group of people to be around – not just the Crossmen but everyone who marches in a drum corps. They motivate me every day." With assistance from Josh Peterson, Jolesch Photography.