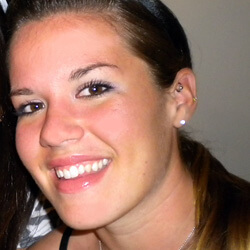 Camaryn Speranza
Camaryn Speranza, 21 SUNY Brockport Boston Crusaders Color Guard, 2008-2010 How did you choose your corps? Originally I chose Boston because the caption head, Matt Winans, had instructed me previously and I loved his teaching style. What keeps me coming back to Boston, however, is not only the staff, but the incredible support and love from the alumni along with the real sense of family you have from your fellow members during and even long after the season has ended. The people who have been parts of this organization, both past and present, are so eager to help you out with anything you need. What was the experience like the first time you auditioned for a corps? The first time I auditioned for a drum corps was my rookie year at Boston in 2008. I remember flying all the way from New York to Florida feeling nervous and having a million questions running through my head: What was it going to be like? Were the veteran members going to be helpful? What was the other staff going to be like? Can I really do this? I remember being most nervous about my rifle audition because it was the first one I'd ever had to do before. Matt called out names of people auditioning on rifle and I remember being shocked that I was the only girl auditioning, which just added to my nervousness. When the time came, Kim Bolduc, a color guard staff member with Boston, brought us outside. I had read her bio on Boston's website that explained how she had taught Carmel High School and marched with the Cadets and Pride of Cincinnati (a winter guard I had idolized since I was little). Once we got outside I didn't want to choke in front of someone who had such an amazing background. My last nervous memory was throwing a quad for Kim by myself. I remember releasing and thinking, "I can do this." I nailed my toss and from then on I was nothing but excited for the rest of the experience. For the remainder of camp all I wanted to do was retain as much information from Kim and the rest of the staff at Boston because I knew they had so much knowledge and advice on how I could better myself in the activity. Whether I received a spot or not, at least I knew I was improving. What's the best way to prepare for an audition? In my opinion, the best way to prepare for an audition is to just go in with confidence. There are going to be people at the audition who are better than you, and there are going to be people auditioning who are worse than you. But no matter what, be confident in yourself. You've probably worked incredibly hard to get to the point where you feel you are good enough to audition anywhere so be proud of that. If you're going to drop, crack a note, or whatever, you were just maxing it out so hard that you made a mistake. Everyone does it, and it's not the end of the world. Pick yourself up, dust yourself off, and keep on pushing. What would you say to someone who is unsure whether or not to audition for a drum corps? To those who are unsure if they want to audition for a corps, I would absolutely say do it! It really is an amazing experience. You'll never know if you don't try, so why not? You will be amazed how much information you can get just from attending an audition or rehearsal camp. The staff at the organization you're auditioning at is going to give you corrections you should make. Whether you get a spot or not, their advice is something that you can take home with you and work on to better yourself for next time. Any other advice? Be sure that during your audition you make the corrections that the staff gives you. I know it might seem obvious, but you would be surprised how many people get the same correction over and over again at auditions. Even though it's an audition and it's not the end of the world if you don't receive a spot, you're still getting a correction from someone who's going to decide whether or not you'll be marching with that organization. The correction might not be what you're used to or comfortable with, but that's probably one of the reasons why you're auditioning – to learn something new. Secondly, don't be afraid to put yourself out there! If the staff asks who wants to do the work by themselves or if they allow time at the end of the audition for tricks, do it. If you mess up or drop, it's fine. What's important is that you tried and showed that you had the initiative and guts to do get up there in front of everyone alone. Learn more about corps audition dates, locations and additional info.