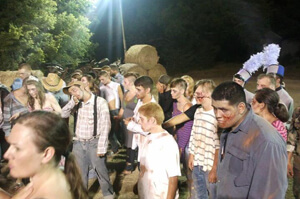 Courtesy of Forte
Forte became a drum and bugle corpse last week when they took part in filming the upcoming flick, "Let There Be Zombies." "Dallas Burgess, our Program Coordinator has a friend that is in the film making business, and it was arranged by Dallas and the movie director," Forte Director Christopher Todd said, explaining how the corps got involved with the film. "Let There Be Zombies," directed by Andrew Patterson, follows a band of four characters as they struggle to survive the first few days following a zombie apocalypse. The corps spent two, eight-hour blocks filming. "One on the evening of June 24 from 6 p.m. to 2 a.m. and then one of June 30 from 6 a.m. to 1 p.m.," Todd said.  While most of the corps members played extras, one member, Abbie Butler, was cast in a speaking, secondary role. After filming, the corps posted photos from the set to their Facebook page. View photos from the set.