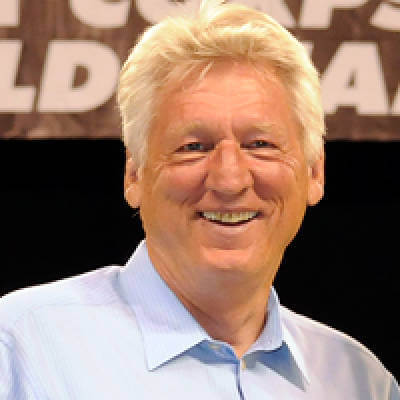 A corps as rich in history as the Phantom Regiment, few individuals have had the long and lasting impact as that of Dr. Daniel Richardson.

A member of the corps in its early years from 1956 to 1964, Richardson, or simply "Dr. Dan," as he's affectionately known within the organization, began his tenure as program coordinator with Phantom Regiment in 1972, overseeing the corps' staff members and creative design process.

Hall of Fame member Jim Wren credits Richardson as a pioneer. "[Dr. Dan] was one of the earliest individuals to recognize the need for someone to coordinate the work of the individual caption heads," he said.

Additionally serving in a variety of roles including corps director and board member, Richardson's personal impact on the thousands of corps and staff members who have been a part of Phantom Regiment is what he has especially been come to be known for.

John Madden, Michigan State University Associate Director of Bands and a Regiment alum and former staff member in the 1980s, has always been impressed with how Richardson not only served as a management figurehead within the corps, but also how he played so many additional roles as diverse as medical doctor, nutritionist, leadership consultant, mentor and friend to all who he was around.

"[Drum corps] wasn't a hobby or weekend activity, it was at the center of [his] very being," said Madden. "Dr. Dan Richardson displayed this loyalty through his caring nature, his personal financial contributions, his relentless standards of excellence, his ability to motivate and inspire, and his instinct to care for and comfort each and every member of the Phantom Regiment. "

"It is Dr. Dan's positive and remarkable influence on the human condition that really allows him to rise above," said former Phantom Regiment visual designer Myron Rosander. "It is through his amazing support of our most precious commodity, our kids, where Dr. Dan's light shines the brightest."

Richardson continues to be an integral part of Phantom Regiment organization severing as a member of the corps' board of directors and as a program advisor to its team of designers. A successful medical doctor outside of the drum corps activity, even with numerous commitments to travel and lectures, Phantom Regiment Executive Director Rick Valenzuela says Richardson, "always has time for us and the drum corps activity. He continues to be an influence that is unmatched."

"In a world dominated by self importance, titles, statistics and inflamed opinion, it is Dr. Dan's humble presence to the staff and students which make him the invaluable resource that he is," said Rosander. "These virtues are often difficult to measure, yet they are the fundamental ground zero of what makes our beloved activity so outstanding."