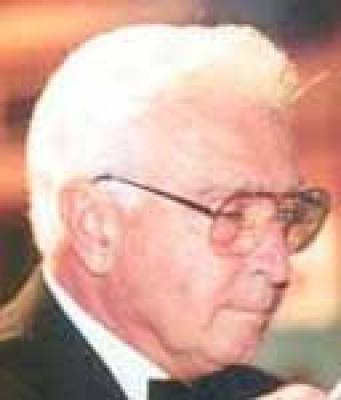 Alfred "Corky" Fabrizio is a drum corps journeyman whose drum corps career spanned multiple decades, and who served as a performer, instructor, arranger, adjudicator and show coordinator in those years.

Fabrizio played with and/or instructed and arranged brass for 16 drum corps around the country, from the Cadets of Greece to the Alpine Girls to the Cavaliers. He was also schoolteacher for 37 years.

"Mr. Fabrizio has been an important part of the drum corps and DCI arena for decades. Not only has he taught, composed, arranged and judged, but he has been on numerous committees for redesigning judging sheets in several stated, developing and starting marching band and drum corps circuits and training fellow adjudicators," said Beth Fabrizio, Corky's daughter, in Fabrizio's hall of fame nomination letter.

Dave Richards, also a DCI Hall of Famer, noted Fabrizio's many talents in a hall of fame nomination letter. "He is one of a very few that has touched the activity as a performer, instructor, arranger, adjudicator, show coordinator -- and achieved success and greatness in every capacity," Richards said.