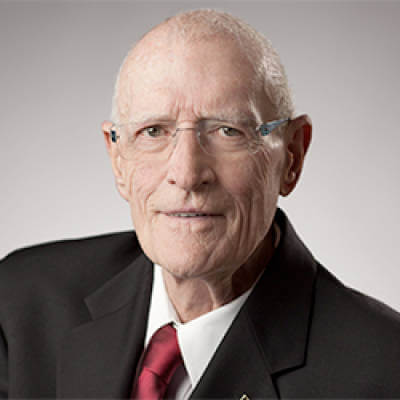 A self-made titan of industry, Bill Cook built his Cook Medical company from the ground up in a small Bloomington, Ind. apartment, starting with a $1,300 loan, some basic tools to make angioplasty catheters, and a single card table he took to trade shows to display his work.

A little over 20 years after founding the company, he decided to start a drum corps. Few could imagine the impact Star of Indiana would have on the drum corps activity during its run at the DCI World Championships from 1985 to 1993, nor the further influence it would have as the Tony Award-winning production, "Blast!"

Even as a busy executive, Cook took great joy in watching Star of Indiana members learn, excel and do great things, often dressing in costume to fit the theme of the corps' productions. "He was a hands on leader, mentor and participant in the daily life of the drum corps," said former drum major Becky Wood Saddlemire. "He drove a bus, cheered for us in the stands and wouldn't hesitate to 'pull up some curb' to talk with the members during meal time."

Cook was often scorned as the man behind the "best corps money could buy," but in reality, he simply ran Star of Indiana as a legitimate business. The corps needed to travel in the summer, so he founded a charter bus company and travel agency to handle the logistics, and even more importantly, to operate year-round to raise additional money for Star of Indiana. In doing so, Cook created the model for how today's drum corps are run as businesses, utilizing their assets to reach out and create programs that help the corps survive.

"To be sure, Bill Cook was a formidable personality with strong opinions," 2013 DCI Hall of Fame inductee Steve Rondinaro said. "You don't succeed at his level in the business world otherwise. He'd be the first to tell you he rubbed some people the wrong way in and out of the drum corps activity, but you knew where he stood and his heart was always in the right place."

Cook's heart was in the place of doing whatever he could to take care of and provide opportunities for young people who were engaged in the drum corps experience, whether or not they were marching as members of Star of Indiana.

DCI staff writer Michael Boo recounts that when the 27th Lancers fleet was mired by mechanical problems, Cook sent buses from his own Star of Indiana fleet to pick up the stranded corps members. When the Cavaliers' food service trailer was destroyed by fire while on the road in the middle of summer, Cook sent Star of Indiana's food truck to the corps to get it through the season. When the Troopers fell on tough financial times, Cook arranged for his friend John Mellencamp to fly to Wyoming to perform a benefit concert for the corps.

"Bill loved drum corps. All drum corps," longtime DCI television producer Tom Blair said. "He and his wife Gayle arrived at drum corps shows early and sat in the stands from the first corps to the last. He saw the positive influence of the drum corps experience and provided that experience to as many people as possible."