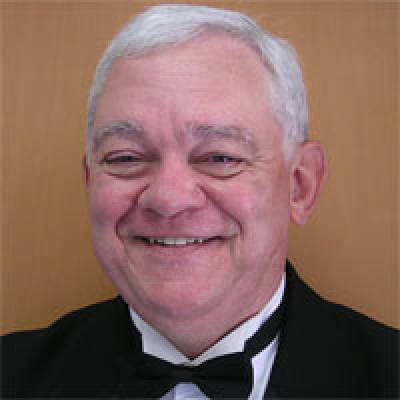 The Spirit of Atlanta was founded in 1976, almost single-handedly under the vision and determination of Freddy Martin. From finding a local television station to sponsor the start-up of the corps, to building the staff and membership, Martin did it all. And with the start of Spirit and their signature southern swing sound, he was the catalyst for an explosion of drum corps activity in the South in the late 70s and 80s.

Martin served as Spirit's director from the corps' founding through the 1993 season. A noted band director in the Atlanta suburbs, Martin brought a love of music and especially for the education process to the corps. No one may have experienced that better than Freddy's son, Christopher, who spent many summers on the road with his dad from the time he was a pre-schooler.

"He could never stop teaching, sharing, inspiring. His passion for music has inspired so many in and out of the drum corps world to make music and education essential parts of their lives," said Christopher in his father's Hall of Fame nomination letter. "His efforts have inspired so many, that his life can only be considered a reflection of his own delight in music."

Christopher's father was his first brass teacher, and he became a member of his father's corps himself in 1993. Today, Christopher Martin serves as the principal trumpet of the Chicago Symphony Orchestra.

Freddy Martin not only served as a teacher in music to the young men and women of Spirit, but he also imparted many life lessons to members of the organization. After Spirit hit a hard time in 1980 after the tragic passing of the corps' brass arranger, Jim Ott (1995 DCI Hall of Fame inductee), Martin led the corps through a grieving period that easily could have ended the corps' season.

"I remember as though it were yesterday, soon after the accident, Freddy turning and saying, 'We've got to help these kids,'" noted Jim Clark, Spirit of Atlanta charter member and current chairmen of the board for Spirit from JSU, in Martin's Hall of Fame nomination letter. "It was his finest moment. We all learned lessons that summer that most people never experience in an entire lifetime. He exemplified 'the drum corps way' if anyone ever did."

Today Martin continues to forge the way in the drum corps activity, in his free time away from building a private school music program, teaching the Phantom Regiment brass line, judging band shows, and serving as a guest educator and clinician around the country.