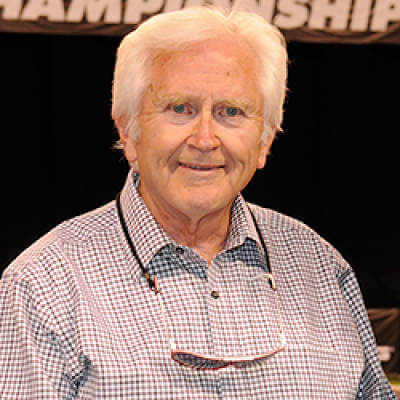 First and foremost an educator, John Simpson's top priority when teaching a brass section-whether for the Bridgemen, Sky Ryders, Star of Indiana or others-was on playing with excellent tone quality and intonation.

"His brass sections had an unmistakable vibrancy of tone and always played with good tuning," said Chris Knighten, a Sky Ryders alum who now serves as director of bands at the University of Arkansas. "The resulting 'Simpson Sound' was powerful, full of dynamic extremes and incredibly musical and entertaining."

"From 1979-1983, John arguably produced some of the best horn lines in DCI, regardless of overall corps placement," said Santa Clara Vanguard brass arranger JD Shaw who is a former member of the Sky Ryders. "The technical prowess and connection with the audience were second to none."

Joining the United States Air Force Drum and Bugle Corps in the 1960s and soon after the New York Skyliners, Simpson helped lay the groundwork for developments in bugles that at the time were rudimentary compared to today's instruments; regulated to single valves that limited the number of notes that could be effectively played.

With DCI Hall of Fame member Robert "Pepe" Nataro, Simpson worked to develop a new "slip-slide" technique for bugle playing that incorporated the use of valve and valve-slide combinations to allow brass musicians to play through more notes on their instruments. As an arranger collaborating with the likes of DCI Hall of Fame member Larry Kerchner, Simpson used those new techniques and note combinations to create harmonies never before heard on the drum corps field.

"John helped fashion arrangements that incorporated key signatures that allowed for more chromaticism, resulting in a much richer harmonic palette than heard from most corps in that era," Knighten said.

Whether helping to develop new instruments like the King contrabass bugle first used by the Sky Ryders and Blue Devils in the early 1980s, or pushing for changes in the DCI adjudication system to reward corps that made musicianship a top priority, Simpson set new standards in drum corps brass playing while influencing a whole generation of musicians and future educators.

"[John] was a true devotee to proper brass pedagogy and was immovable in his standards of excellence," says Shaw. "To this day, as a professional performer, I regularly refer back to his tenets of sound production, listening and musical nuance."