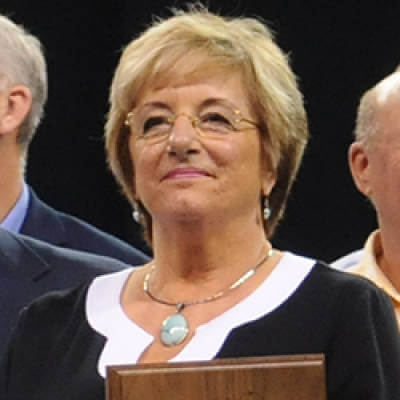 Starting her drum corps career as a member of the Norwood Park Imperials from Chicago, Marie Grana-Czapinski has made her mark in the marching arts activities as a top-notch visual adjudicator, from color guards to marching bands to drum corps.

At the young age of 18, Czapinski made the transition from corps member to instructor with the Imperials. Soon after under the tutelage of DCI Hall of Fame member Earl Joyce, she learned the ropes of judging as part of the Central States Judges Association.

In the early 1970s under the mentoring of DCI Hall of Fame member Donald Angelica, Czapinski worked with a variety of corps including the Finleyville Royal Crusaders, Seneca Optimists, Madison Scouts and Spirit of Atlanta, in the process gaining valuable insights as both an instructor and a judge.

"While they were teaching corps together, Donald gave Marie the opportunity of a lifetime for a young judge," husband and 1999 DCI Hall of Fame inductee Gary Czapinski said. "He assigned her to the DCI World Championship judging panel in 1976 and she has never looked back. She was natural as a judge and was immediately accepted by the DCI community in the dual role of instructor and judge."

Since that first opportunity in 1976, Czapinski has been a regular fixture on adjudication panels for the DCI World Championships and other major regional contests.

As a judge, Czapinski is noted for her ability to communicate clearly and concisely, the instructor at heart always eager to give the competing corps constructive feedback to improve future performances.

"Marie is widely respected for her knowledge, enthusiasm and honesty in her interactions with every drum corps, regardless of their level of accomplishment," fellow DCI judge Nola Jones said. "The last place drum corps enjoys the same attention and boundless energy that she gives the first place corps."

"Marie's judging tapes will always be memorable and are always in demand by the corps members to listen to after a performance, as she talks to them, cheers for them and encourages them to dig down and give their best consistently," Santa Clara Vanguard CEO Jeff Fiedler said. "Her insight, questions, and commentary are respectful and beneficial to the corps, yet ask you to dig deeper as a designer, instructor or performer to maximize the performance,"

In more than 40 years as part of the judging community, Czapinski has served on various committees and subcommittees to revise and improve DCI's judging systems, as well as educate new and current adjudicators. With a penchant for continually educating herself with the latest skills and proficiencies in an ever-changing activity, Czapinski is one of only a small handful of judges who are qualified to judge every one of Drum Corps International's visual captions.

"Marie has been integral in mentoring countless new judges and was continually on the lookout for emerging talent to join our ranks," DCI Judge Administrator John Phillips said.

As she once was by the likes of Hall of Fame greats like Gary Czapinski, Rick Maass, Earl Joyce, Donald Angelica and others, Czapinski has in turn advised and inspired a whole new generation of instructors and judges.