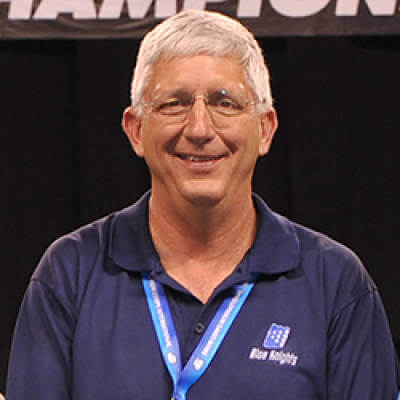 Mark Arnold is one of the longest-serving leaders in Drum Corps International today, having been corps director of the Blue Knights since 1985.

Getting his start as an instructional staff member with the Troopers, Arnold soon took on the role of tour director for the Wyoming drum corps. Under the tutelage of DCI Hall of Fame member Jim Jones, he learned the ins and outs of what it takes to successfully operate and get a drum corps down the road every summer.

In nearly 30 years on the job with the Blue Knights, Arnold has relied on a steadfast can-do, never-give-up attitude to completely transform the Blue Knights organization into a multifaceted performing arts entity. Today the Blue Knights is just one of multiple ensembles under the umbrella of the Ascend Performing Arts organization. In addition to operating the drum corps and an indoor percussion program, Ascend annually supplies performing groups for the NFL's Denver Broncos, including a drum line and brass ensemble.

Leading the Blue Knights from 31st place in the 1980s, Arnold called on notables like DCI Hall of Fame members George Zingali, Ralph Hardimon and Jay Bocook to staff his corps and bring it to a new level of greatness. By 1991 the Blue Knights found themselves as a DCI World Championship Finalist, and have enjoyed a spot among DCI's "Top 12" nearly every year since.

But the drum corps experience for Arnold has never been solely about the competition. "Mark's goal has consistently been to transform hard-working youth into high performance adults through the lessons that only competitive musical performance provides," longtime Blue Knights volunteer Thelma Fung said.

Blue Knights board president Ken Adams says, "Our staff members over the years have clearly been directed by Mark to understand that the kids are number one."

Arnold has tirelessly worked to support those kids and consequently left a lasting impression on more than 6,000 youth from around the world in those years. "It's not uncommon to see 40-year-old men and women hugging Mark and thanking him for personally saving or changing their lives," Adams said. "He has provided endless council going far beyond his responsibilities as corps director, also serving as a father figure, friend and confidant whenever needed."

In addition to shaping the course of the Blue Knights, Arnold also has played an integral role in the ongoing development and successes of Drum Corps International as a collective. He served as chairman of the DCI Board of the Directors in 1994 and again from 2008 to 2013.

Arnold was honored as the inaugural recipient of the George Bonfiglio Chairman's Award at the 2012 DCI World Championships, which is given to an individual each year who demonstrates extraordinary leadership and service on behalf of DCI and its performing drum corps.