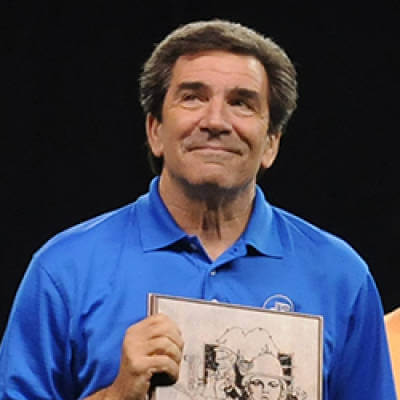 The "face" and "voice" of Drum Corps International for more than 35 years, it wouldn't be an understatement to say that millions of individuals worldwide have seen Steve Rondinaro, as he's hosted DCI's television and movie theater broadcasts since the late 1970s to the present day.

"For life-long drum corps fans, it's practically impossible to imagine watching the DCI World Championships on television or in movie theaters without being engrossed by what Steve says about the drum corps activity," DCI Staff Writer Michael Boo said. "Through the airwaves, he brings people right into the stadium."

Rondinaro's drum corps career started like many others who have entered DCI's Hall of Fame, as a marching corps member. A young 10-year-old in upstate New York, Rondinaro joined and marched with the Watkins Glen Squires through 1975. He also co-managed the corps that year as they narrowly missed the finals competition with a 13th-place finish in the 1975 World Championships in Philadelphia. Rondinaro would help lead the Squires through 1979.

Forging a successful career as a news reporter and anchor outside of drum corps, Rondinaro got his start with DCI's television broadcasts when asked by Hall of Fame Member Don Whitely to host a local PBS telecast of the 1976 DCI East competition in Allentown, Pa. A similar opportunity was offered in 1977 for the DCI Canada event in Hamilton, Ontario, and by 1979 he got his opportunity in front of the camera at the World Championships, sitting alongside jazz trumpet legend Maynard Ferguson as co-host.

Over many years Rondinaro has had the opportunity to work with a diverse array of broadcast hosts from actress Rita Moreno to sports broadcasting legend Curt Gowdy, using his unique experiences and talents as a drum corps "insider" to educate his television partners even if they have little or no familiarity with the drum corps activity.

As Rondinaro's broadcasting career took him to Miami in the early 1980s, he wouldn't lose sight of managing a corps. There he helped reorganize the Florida Vanguard into a new corps, Florida Wave, a group that went on to win DCI's A-Class Championship title in 1984.

"He led from the top by setting a direction and helped guide the people hired to run the daily duties of building great young adults through the drum corps activity," former Florida Wave staff member Jeff Bridges said. "Steve's unselfish acts helped shape the lives of hundreds of young adults who would never have had the chance if not for what he did and what he gave."

Rondinaro has brought the same attitude he had as a corps director into his work on countless Drum Corps International broadcast initiatives.

"Steve has lived it as a performer, instructor and corps director," longtime DCI broadcast producer and director Tom Blair said. "As a broadcaster his priorities have been the same, always asking, 'Will it help DCI?' 'Will it help the individual corps?' And, most importantly, 'Will it help the kids?' His compensation has never been about money. He lives to support drum corps and he has done so for his entire life.