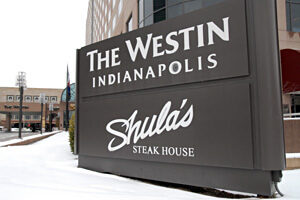 The Indianapolis Westin
Drum Corps International instructors, designers, judges and directors considered three rules proposals at DCI's Annual Meeting in Indianapolis, Jan. 21-22. With few proposals on the docket, it was a quick and tidy affair, in contrast to some gatherings in recent years. Learn more about all three proposals in this video. Read the rule proposals in their entirety. The proposal to allow for vocal categories at the DCI Individual & Ensemble competition passed unanimously by the 22 voting World Class corps in attendance. Submitted by Tim Rall, Director of the Open Class 7th Regiment and Tom Spataro, Executive Director of the Boston Crusaders, the proposal was the brainchild of Christina Mavroudis, writer for both DCI.org and Drum Corps World. After learning the proposal was approved, Mavroudis said, "I'm extremely excited this passed, but more than anything I'm excited for the performers who have waited for this opportunity to show their true vocal talent in front of their peers." The second proposal to allow corps staffs to control their soundboards remotely from the stands, submitted by Bluecoats Executive Director David Glasgow, also passed unanimously. "[The new rule] is going to take away a lot of anxiety, such as staffs wondering if the sound will sound right for each stadium or if the amplified front ensemble will balance with the horn line," said DCI percussion judge Alan Kristensen. "This will answer those concerns. When instructors are in the stands, they'll be able to hear the problems right away and make instant corrections. "I can't tell you how many critiques I've been in when judges have brought up issues about balance of the electronics. Instructors have mentioned that their settings from the prior show didn't work for the stadium the next day. This will allow them to instantly adjust their settings more effectively for each individual performance venue." The proposal to add an Entertainment Effect caption received much discussion from fans on the Internet over the last week. Madison Scouts Executive Director Chris Komnick, who sponsored the proposal by the corps' Artistic Director James Mason, said that his organization received hundreds of comments from fans about it. According to Komnick, "Our primary intent was to generate discussion, to take it to the instructors and designers and say, 'As managements of drum corps, we've identified there are some issues we are hearing in regards to entertainment.' We need to determine a way to align our rewards system to be closer to the expectations of what an audience considers to be entertaining." The proposal was discussed at length Friday night, however, it was decided that rather than sending it along to the voting membership, it would be passed along to a task force for further development and consideration. "I'm comfortable with what happened, and I trust the task force to vet this out," said Komnick. "Its potential impact is far too profound for the future of the activity for it to be finalized in a 24-hour period. I believe that [DCI Artistic Director] Michael Cesario and the task force members will take their time to evaluate the proposal and potentially trial it at DCI events."