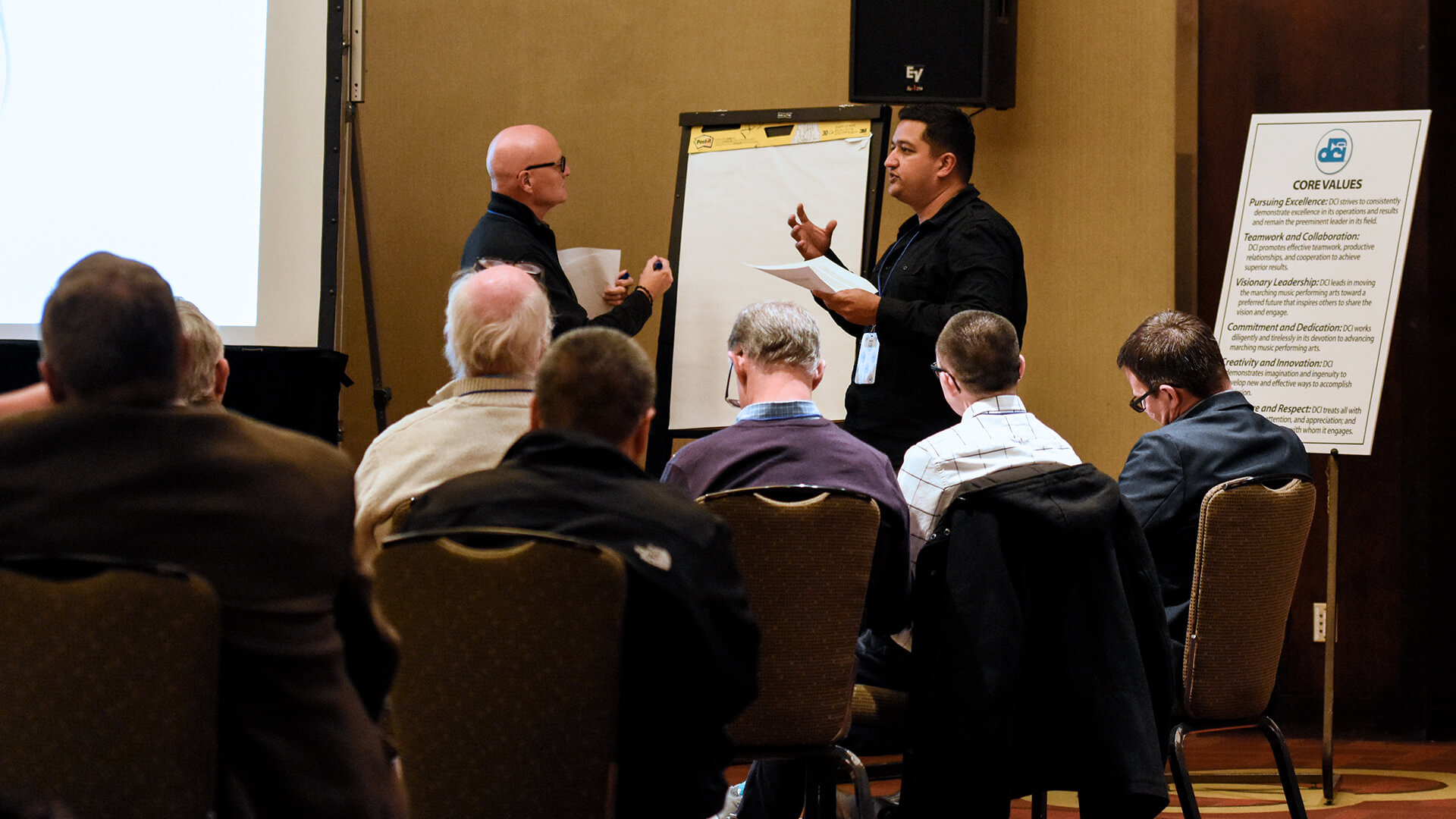 Saturday evening of the Drum Corps International Annual Meeting in Indianapolis concluded with representatives of DCI’s voting membership discussing rules change proposals presented to them for their review and approval.

Before reaching the voting membership, rules proposals are vetted and discussed in caption-specific caucus sessions made up of corps instructional staff, designers, and judges who serve on the DCI Rules and Systems Task Force.

Learn how a DCI rules proposal becomes a rule.

One proposal was withdrawn in the caucus sessions that called for a second brass judge to be used during larger DCI Tour events and as a result did not advance to the voting membership.

Other proposals that failed to advance the instructors caucus after lengthy discussion and evaluation this weekend was a proposal that would change the makeup of a five-judge adjudication panel (12 yes, 13 no), a proposal for corps to be ranked by ordinals instead of scores (1 yes, 24 no), and a proposal that called for limits on brass amplification (3 yes, 22 no).

“When we were in the room, all the competitive hats were off. We were able to really speak freely as designers and instructors and not necessarily as representatives of individual drum corps,” Blue Knights music coordinator Kevin Shah said about the caucus sessions. “There was a really good sense of respect for each others’ opinions even when they differed.

“The more of these kinds of discussions we can have, the more we are going to grow and really have the ability to pinpoint who we are as a community, as a collective, and as an activity.”

Shah and his colleagues will have that opportunity again in 2019, after a unanimous vote will change DCI’s biennial rules congresses back to an annual affair next January, giving corps instructors and designers the opportunity to not only discuss rules, but also share information and continue their education to further the artistic standard of the marching arts.

One of the most significant rules changes approved on Saturday evening will increase a corps’ maximum membership from 150 to 154. While that proposal passed 21 to 1, a subsequent motion to increase that limit to 160 was voted down.

The proposal to expand the field of corps that advance to the DCI World Championship Finals from 12 to 15 was voted down 6 to 13 with three abstentions.

Another point of discussion raised during the rules voting session addressed smaller early-season DCI Tour events that utilize a panel of five adjudicators. That led to a motion that passed unanimously to utilize a full panel of eight judges for those shows starting with the 2019 DCI Tour.

Cadets Director George Hopkins also made two additional proposals toward the end of meeting. The first centered on altering the way that scores and placements are announced during the DCI World Championships while the second called for the delayed release of full scoring recaps one week after a show.

While both proposals were rejected by the voting membership at this time, the first will be evaluated in more detail by corps directors in the coming months for future consideration after the 2018 DCI Tour.

Other headlines from the 2018 DCI Annual Meeting