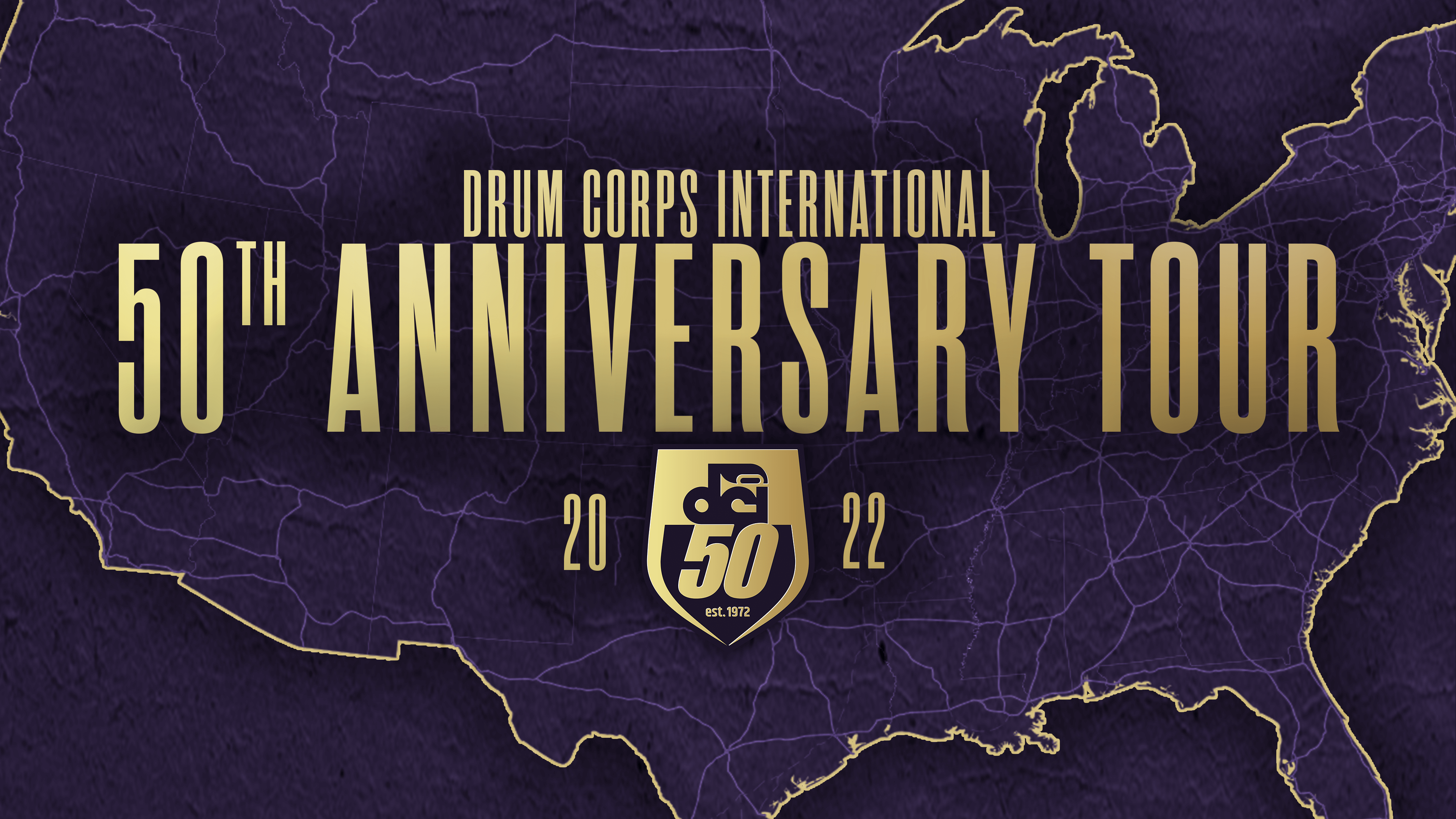 Drum Corps International is painting the nation gold in its 50th anniversary summer, and all roads will lead to Indianapolis for the 2022 DCI World Championships.

After a canceled 2020 Tour due to the COVID-19 pandemic and an exciting — albeit abbreviated — return during the summer of 2021, the 2022 DCI Summer Tour will mark the first “full” season since 2019, bringing the excitement of performance and competition to audiences in more than 30 states.

As such, familiar venues and cities have returned to the DCI Tour map, bringing the excitement of competitive marching music back to fan bases and markets all over the United States that haven’t hosted live drum corps events in more than two years.

“We’re thrilled to provide the opportunity for our incredible performers to safely get back on the field at stadiums across the country this summer,” Drum Corps International CEO Dan Acheson said. “As we prepare to usher in the next great chapter in a storied history, we look forward to celebrating 50 incredible years of our activity.”

With more than 90 events scheduled across eight weeks, the 2022 Drum Corps International Tour map is in place for a truly historic summer.

It’s time to buckle up and put the car in gear on the road to the golden anniversary of DCI-style drum corps.

Since 2015, Drum Corps International’s summer season has opened its gates in the midwest, with the DCI Tour Premiere and corresponding cinema event serving as the very first stop on the schedule.

This year, the DCI Tour Premiere is still set to be held at Detroit’s Ford Field — the same venue that hosted the event in 2018 and 2019 — but will follow a trio of intriguing Southern California shows the weekend of June 25, including an 11-corps lineup at Pasadena’s iconic Rose Bowl Stadium.

After DCI’s West Coast contingent kicks off the 50th anniversary season, the focus will then shift to Detroit, with the DCI Tour Premiere serving as the lone event on the schedule during the final days of June.

The Heat of July

A handful of high-profile venues and markets — some familiar, some relatively new, and some brand-new to the DCI Tour — lay out the 2022 drum corps calendar in early and mid-July.

July 16 in particular will serve as arguably the busiest non-Championship day of the 2022 DCI Tour, with 34 World and Open Class corps performing across five different venues. On this day, corps will march into Alabama, California, Tennessee, Colorado, and to the historic site of DCI’s very first championship in 1972, Whitewater, Wisconsin.

Tennessee’s July 16 event will mark a return to Liberty Bowl Stadium for DCI Memphis, a new and popular stop on 2019’s tour map.

Heading South for the Summer

Drum Corps International’s swing through the Southern United States will be one for the books, as the summer schedule heats up heading toward August.

2022’s official “Texas Tour,” which features shows in nine Lone Star State cities across nine days. The DCI Southwestern Championship (July 23) in San Antonio will serve as the first appearance of nearly all World Class corps in one competitive lineup.

From there, the tour will shift into the Southeastern states, with headliner events in familiar places like Little Rock, Arkansas, and Murfreesboro, Tennessee, all pointing toward the final two days of July.

The Atlanta venue — new to the DCI Tour in 2022 — carries a storied history, having originally been built for the 1996 Summer Olympics, serving as the home of MLB’s Atlanta Braves from 1997 to 2016, and now existing as the home venue for Georgia State University football games.

While the 50th anniversary DCI Tour features many exciting new wrinkles, one stronghold that remains intact is the annual DCI Eastern Classic. As it has for decades, the Allentown, Pennsylvania event held at historic J. Birney Crum Stadium will feature more than 20 performing ensembles across two days during the final weekend before the DCI World Championships.

Two-night packages to attend the DCI Eastern Classic, set for August 5 and 6, are currently on sale for a limited time only.

Prior to their Allentown appearance, though, corps will make their way up the Eastern United States at a handful of prominent early-August events, including those in Annapolis, Maryland (August 2) and Centerville, Ohio (August 3).

Once DCI Eastern Classic events conclude, corps will make their way to Indianapolis with a few stops along the way in Pittsburgh, Pennsylvania (August 7), plus a trio events set for August 8 in Akron, Ohio; Erie, Pennsylvania; and Cincinnati, Ohio.

Particularly in late July and early August, Open Class corps will hit the road for a series of events that will propel them into the DCI World Championships in Indiana.

Spartans and Legends, 2019’s Open Class gold and silver medalist, will meet for the first time on July 29 and 30, in Sheffield, Pennsylvania and Southeast, Michigan, respectively. From there, a string of seven Open Class shows between August 1 and 6 will set the table for World Championship events in Marion, Indiana.

For the very first time, early-August Open Class events will feature The Battalion. The Salt Lake City, Utah corps was prepared to attend its first DCI World Championships in 2020 before that year’s tour was canceled, so 2022 will mark their debut at the season-ending events.

Prior to arriving in the Hoosier State, The Battalion will appear at Open Class-centric events in locations including Twin Cities, Minnesota (August 3), Cedar Rapids, Iowa (August 5) and Charleston, Illinois (August 6), the last of which will be held at Eastern Illinois University’s 10,000-seat O’Brien Field.

A pair of California Open Class corps — Vanguard Cadets and Blue Devils B, which finished as Open Class gold and silver medalists every year from 2013 to 2018 — will both make their respective returns to August’s Open Class events for the first time since the 2018 season, after performing a California-specific tour in 2019. They will also be joined in the journey from the West Coast to Indiana by 2018 and 2019 Open Class bronze medalist, Gold, adding a hefty dose of intrigue to the competitive landscape.

The DCI World Championships will be bigger than ever in Drum Corps International’s 50th anniversary season.

Kicking off August 8 and 9 at Wildcat Stadium in Marion, Indiana, on the campus of Indiana Wesleyan University, more than a dozen corps will participate in the Open Class World Championship Prelims and Finals.

Once a gold medalist is crowned in Marion, the focus will shift to Indianapolis for the remaining four days of “Finals Week,” starting Wednesday, August 10 for DCI’s annual virtual Hall of Fame Induction.

BOOK YOUR HOTEL FOR THE 2022 DCI WORLD CHAMPIONSHIPS IN INDY

Over the course of three days, a field of more than 35 competing Open and World Class ensembles will be narrowed to 25 and then to 12, before the 2022 DCI World Champion is crowned on Saturday, August 13, marking the resounding culmination of the DCI Tour.

Beyond the competition, “Finals Week” will feature a variety of additional events in the Circle City, including Friday, August 12’s 50th Anniversary Gala and the return of the Shining a Light event on Monument Circle, which in 2021 helped put an important spotlight on the importance of music education.

The annual SoundSport International Music and Food Festival is set to make its return during the morning and afternoon of August 13, with a variety of groups of all sizes, ages and instrumentations from around the United States and internationally set to perform.

On Monday, December 13, tickets to more than 20 of the most popular events of the 2022 DCI Tour will go on sale through the DCI Box Office and Ticketmaster, including single-day tickets to the DCI World Championships.

Sign up for Drum Corps International’s "Box Office Alerts" to receive email notification when tickets to 2022 events near you will be going on sale throughout the winter months.

Premier Event Series at a Glance

MUNCIE, IN
DCI Central Indiana
Scheumann Stadium
Friday, July 1
Notify me when tickets to this event go on sale

DENTON, TX
DCI Denton
Apogee Stadium at the University of North Texas
Thursday, July 21
Notify me when tickets to this event go on sale

ROUND ROCK, TX
DCI Round Rock
Kelly Reeves Athletic Complex
Thursday, July 21
Notify me when tickets to this event go on sale

HOUSTON, TX
DCI Houston
TDECU Stadium at the University of Houston
Friday, July 22
Notify me when tickets to this event go on sale

MURFREESBORO, TN
The Masters of the Summer Music Games
Middle Tennessee State University
Friday, July 29
Notify me when tickets to this event go on sale