Joe Smith, a frequent contributor to DCI.org last year, will be contributing essays to DCI.org on a regular basis. A picture is worth a thousand words, and in drum corps it's sometimes worth even more. During tour it doesn't always seem that important to take pictures of the random mishaps or that picture-perfect group shot on a free day, but once it's all said and done you're sometimes left with a feeling that you should have taken more. 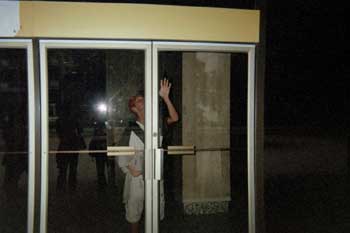 Joe Smith, behind closed doors.
For the past two years I have taken my "ghetto buster" camera. Basically it's a camera that's been in my family at least since I was born and is comparable to brick in size and weight. The sound when it rewinds the film is almost that of a small car passing by. The fact that my camera was very old made it a pain to drag around on free days, and because of that I didn't take as many pictures as I probably should have. Therefore in the off-season, I feel there is a hole somewhere in my collection of tour photos.

All of this brings up a very good story. We happened to have a free day in the Washington D.C. The metro system in that city is not very user friendly. There was a group of four of us that consisted of Steve Beatty, my seat partner, his companion Kathryn, Kaitlyn, a friend of mine from the guard, and myself. Well as we wondered about the city, we decided to get off at a certain stop on the metro to find a nice restaurant to eat in, you know, to offer us a little variety from the usual cook truck food. So after we got off the metro we realized that we were in an underground area similar to that of a rat maze. After searching around for a while, we finally found an elevator leading up. After we exited the elevator on the ground floor we realized we were in an apartment building. With the knowledge we just gained, we knew that we had to make sure the door would be open so that we could find our way back down to the metro after we ate, so that we would not miss the buses. We decided that I would stay inside for a moment to make sure that the doors would open back up so we could get back to the elevator. The three of them walked out of the glass doors leading to freedom, and a few seconds later the door closed and there was a clicking sound. I was thinking, "Wow, that doesn't sound good." And after trying to open the door we realized that a locking mechanism had clicked, and they were locked out of the building, while I was locked in. I wasn't a very happy camper upon finding this information out. After a few minutes they realized that all they could do was laugh and take pictures, which I was not very happy about. So after they took a few pictures, I heard another clicking sound. You know that clicking sound of freedom? Well that's what I heard. OK, maybe it didn't sound like freedom, but we can always pretend, can't we?

Because of that single event we are left with pictures that will always remind us of the time that I got locked in a building and my friends thought it would be great to take pictures and laugh at my misfortune. Moral of the story: Always have your camera with you on tour so that you can be ready at the drop of a hat to take a picture. Pictures are definitely worth a thousand words (and plus, don't you want documented proof that you really were in the best shape of your life for when you tell stories to your children?)

And with that I'm off to pack for another great weekend on the West Coast. Good luck to all that have camp this weekend, or are preparing for an upcoming camp in the short future.
2004 columns by Joe Smith: Dealing with tour withdrawal The Busy musical season A Hectic drum corps week Right where you left off The Other side Preparing for tour Getting away from it all: Report from a Colts' camp Strong winds, early sunset: Report from a Colts' camp Meet the visual tech New challenges in Dubuque My favorite place: Alfred, N.Y. Freezing rain, full ensemble: A report from Dubuque Discussing drum corps over the holidays