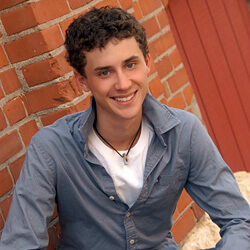 Casey Hallahan
Casey Hallahan, 18 Northeast Iowa Community College Colt Cadets 2004-2007, Colts Trumpet 2008-2010 How did you choose your corps? I've lived in Dubuque, Iowa all my life. Luckily the Colts are based out of the same city. I chose the Colts not only because of the location, but also because of the people within the organization. When I was 12, I had a good friend marching in the Colt Cadets. Not knowing the slightest thing about drum corps, I decided to take him up on his offer and attend the upcoming audition. From then on I became submerged in the activity. At first I chose the Colts mostly because of my relationship with the organization, but through the audition process, I fell in love with the family-like atmosphere and knew it was the right place for me. What was the experience like the first time you auditioned for a corps? I first auditioned for the Colts when I was 15 years old. I knew my chances and decided if nothing else I would audition for the sole purpose of gaining experience. When my personal audition came to pass, I started shaking, thinking twice and panicking like any other 15-year-old in my shoes. Before walking into the room, I took a few deep breaths and realized the possible outcomes. I figured the worst thing they could do is say no. Needless to say, I was too young. But through the experience I knew what to expect, learned how to prepare, and was ready to be the best player and marcher I could be. What's the best way to prepare for an audition? Preparing for an audition takes time. What you put into it, you'll get out of it. As silly as it might sound, recording yourself and playing in front of your peers can be the difference between a contract and a cut letter. Set yourself up for success, become confident with your playing/marching skills, and feel as if you're ready to show off to the world. When the actual audition comes up, stay relaxed but focused, and remember to have fun. What would you say to someone who is unsure whether or not to audition for a drum corps? If you're unsure about marching in a drum corps, know that it's understandable. This activity literally consumes your summer and becomes your life for about three months. This fact alone scares many away. The best thing you can do is try it out. Go to an audition camp or two, test the waters and see what you think. Any other advice? Many corps have individual qualities about them. Before you delve into the activity, be confident in your choice of corps. Have a few legitimate reasons why you want to march there. If your dream corps turns you down, it's okay. If this happens, or has already happened to you, realize that there are many corps out there. Just because you didn't make it once, doesn't mean you're banned from the activity. A little advice though: If you get cut from a corps yet remain passionate about your decision to march, I urge you to keep showing up. There's nothing a director/caption head/tech loves more than to see undying devotion. Bottom line, if the corps you auditioned for isn't all it's cracked up to be, try somewhere else. Have fun with this activity and keep an open mind. Learn more about corps audition dates, locations and additional info.