This Sunday marks the 90th running of one of the most prestigious auto races in the world, the Indianapolis 500. Former DCI intern and current freelance videographer, Amy Wiggs, has been doing camera work as part of an ESPN crew covering the lead-up to and through the race. Wiggs is a Capital Regiment alum (2003-2004) and is a recent graduate of Indiana University-Purdue University Indianapolis. She joined the DCI.org production crew in the summer of 2005 as an intern videographer and will join the crew again during the 2006 Summer Music Games Tour. 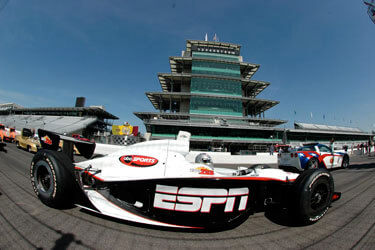 What are you doing at the 90th running of the Indianapolis 500?
I am working as a production assistant with ESPN as the center camera operator for the ESPN2 broadcast Cold Pizza. I am also shooting footage for SportsCenter and ESPN news.

How did you get the job?
Two years ago, ESPN called my college professor and he opened the door for me. This is my second year of covering the Indianapolis 500 with ESPN, and I also assist them with Indianapolis Colts games.

How long have you been on-site? What does your daily job entail?
I started on May 1 and every day is a new experience for me. As race day gets closer my workdays get longer and harder. On a daily basis, I assist with production schedules, studio setup as well as taking part in grocery runs to feed the crew. I am constantly in touch with ESPN lead video editors and graphic artists. They have an open door policy and they are incredible teachers. 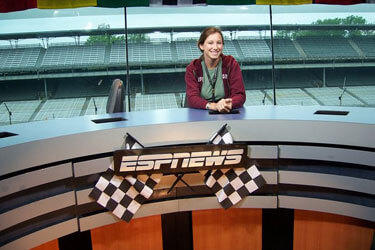 Wiggs on the ESPN set.
How has your experience in drum corps helped you with your position?
Punctuality and a great work ethic. I have actually been caught being the earliest one here on most occasions and they wonder why. I keep telling them that drum corps taught this to me because I didn't want to miss the bus after the show was over! Recent long days also brought back memories of those practice days that would never end. I don't know where I would be if I didn't have that experience.

What do you think will be the most exciting part Sunday's race?
A huge overall feeling of self-accomplishment. A live broadcast watched by so many people and being able to say that I was a part of that is just awesome. It will be hard leaving my ESPN family here, but we are already looking forward to next year.

Have you rubbed elbows with any celebrities?
Yes! After we finished Indy-car driver Danica Patrick's SportsCenter interview, she came and acknowledged the entire crew. I was able to fit in a picture with her before she left. She was really fun to work with, and I hope that she does well on Sunday. 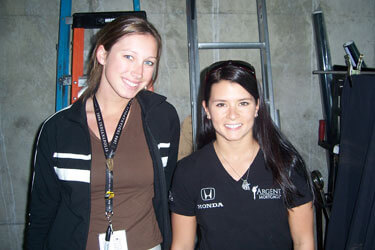 Wiggs with Danica Patrick.
What's your next project?
I am really looking forward to my second season as videographer with DCI and contributing what I have learned here to this summer. The Indianapolis 500 starts at 12 p.m. Central time on Sunday, May 28. It can be seen on the ABC television network. Wiggs' video work for DCI can be seen on the DCI Season Pass.