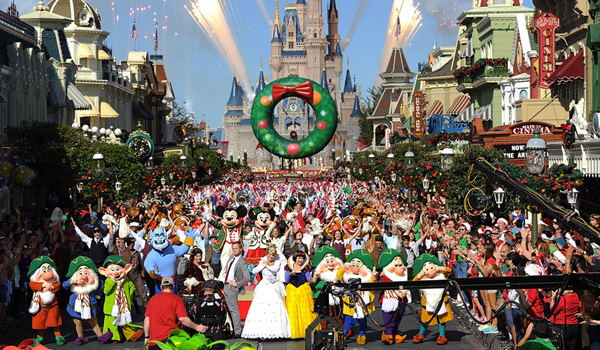 Joining Mickey, Minnie, Donald, Goofy and all the gang, the 2013 Drum Corps International World Champion Carolina Crown will be seen on national television next Wednesday, Dec. 25, as part of the Disney Parks Christmas Day Parade. Taking place at Walt Disney World's Magic Kingdom Park in Orlando, the annual event is taped more than two weeks in advance of its Christmas broadcast. Carolina Crown sent a contingent of 120 members made up of current and alumni members of the corps to participate in the performance on Saturday, Dec. 7. Executive Director Jim Coates says that he was contacted by Disney not long after Carolina Crown won its very first DCI World Championship title this past August in Indianapolis to gauge the organization's interest in assembling the corps for the holiday parade. "After many conference calls with the team at Disney we decided to work with them in creating a performance that's a little bit different than your typical band marching down Main Street," Coates said. "We created drill and music to play in front of Cinderella's Castle before forming into a parade block to highlight the 30th anniversary of the parade." The organization put plans in motion to bring corps members into Orlando the day before being taped at the Magic Kingdom on Saturday, Dec. 7. A little over half of the participating members were bused down from the corps' Fort Mill, S.C. hometown while others flew directly into Orlando International Airport. With a very short timeframe to put everything together, Coates says that the corps turned to Smart Music—an online virtual practice aid—in order for the brass and percussion members to learn the music in advance. In the fall, DCI Hall of Fame members Michael Klesch and Thom Hannum went to work arranging the two pieces of music Carolina Crown chose specifically for this holiday performance including "Bell Song Festival" by John Wasson and "Dashing through the Snow" by Richard Saucedo. Working under strict television production constraints, Coates says that the arrangers made cuts and changes to the music up until the night before corps members arrived in Orlando after a final meeting and input from Disney's director for the broadcast. At Celebration High School just outside of Orlando, Carolina Crown members put in about six hours of rehearsal the afternoon and evening of Friday, Dec. 6, with free time to enjoy the Disney parks later that night and before and after the parade on Saturday. 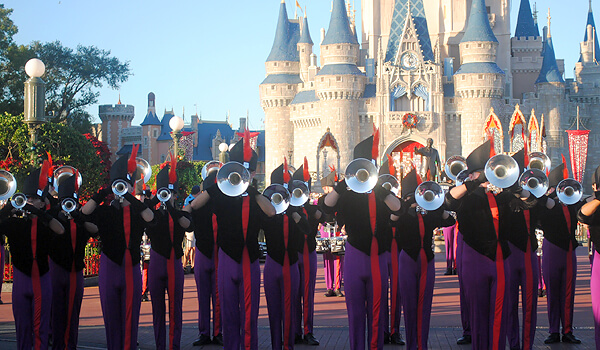 Carolina Crown performs as part of the 30th anniversary Disney Parks Christmas Day Parade.
"On Saturday it took about two hours of shooting live in front of the castle and on Main Street with a live audience," Coates said. "For quality, we also recorded the music standing still since the drill the corps did was kind of different from what we're used to." Overall Coates says the experience for Carolina Crown's staff and corps members was extraordinary. "In a way this became an additional celebration of last August's Championship, with everyone getting to perform for one more time together," he said. Hosted by award-winning actors Neil Patrick Harris and Nick Cannon and joined by "Good Morning America's" Lara Spencer, the Disney Parks Christmas Day Parade will air on ABC-TV on Wednesday, Dec. 25 at 10 a.m. ET/9 a.m. CT/MT/PT. Carolina Crown is currently running a fundraiser to help offset the costs of the corps' trip to and performance in Orlando. Learn more about donating to Carolina Crown's Holiday Campaign Learn more about the Disney Parks Christmas Day Parade.