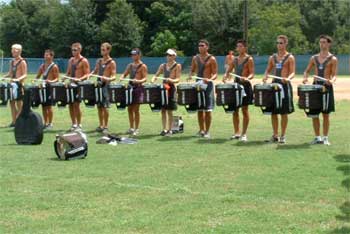 The Cavaliers' snare line, at West Orange High School
Semifinals rehearsal day at West Orange High School started much like quarterfinals rehearsal for The Cavaliers, three-time defending DCI World Champions: Wet and rainy. Just when the corps had the pit percussion equipment unloaded from the trailer Friday and started stretching, another one of those Orlando downpours began in a matter of seconds. The corps did squeeze in some work on ensemble music timing and impact points today in preparation for their Semifinals performance. "We're making final adjustments on two or three things," says Jeff Fiedler, Cavaliers corps director. "They're ensemble music parts in the opener and the third tune. We're also doing a lot of reinforcement." "Rehearsal has been crazy with the weather this week," says Eric Baker, trumpet player. "We've been running in and out between the rain, but we've been getting a lot done." On Thursday, the corps sat in their buses outside the Citrus Bowl for around three hours during the rain delay, waiting for the weather to clear and the show to go on. "They just relaxed, listened to music and prepared for the performance," Fiedler says. "It's Florida." When the corps did perform, it was worth the wait – they garnered a standing ovation and praise from the instructional staff. "I rely on the brass staff to say how the show went," Baker says. "They were ecstatic. I know I personally had my best show. It will be fun to top last night, because we did great." "The guys are performing very well," Fiedler says. "Last night was the best of the summer. Is there room for improvement? Yes." Fiedler says there is some added pressure during Finals Week, but the members are used to it. "You remind everyone not to get caught up in the crowd." One thing they're not caught up in is the competitive photo finish they're having with the Blue Devils coming down the home stretch. "It's business as usual," Fiedler says. "They know there are bigger audiences this week and the season is coming to an end, but we don't change how we're talking about competition. They know what's up. They're smart guys. But we don't have a defense; it's all offense."