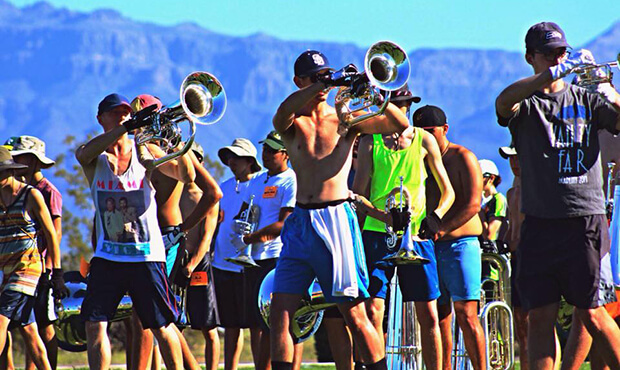 The Academy completed its third training camp of the year last weekend in Arizona.

• Academy takes it outside as drum corps season nears

Academy members were hard at work this past weekend for their latest rehearsal camp. Check out these photos from sunny Arizona.

Blue Knights named the members of the corps' 2015 percussion staff. The team will be led by Mike Jackson who will serve as caption head and arranger.

Check out these snaps from the Bluecoats' March rehearsal camp last weekend.

Tickets are now on sale for the DCI Tour of Champions series event coming to PPL Park in Philadelphia.

Carolina Crown is looking for drivers to transport the corps' merchandise operation during its summer tour.

The Columbians' 2015 production, "1942," will tell the story of America's involvement in World War II both at home and abroad.

Incognito's 2015 production will be based on Gustav Holst's, "The Planets."

DCI's "Irish" corps, Pioneer, can be found marching in this Sunday's South Side Irish Parade in Chicago. Learn more about how this storied corps has developed and held true to its Irish-American heritage over many years.

If you missed Santa Clara Vanguard's big 48th anniversary birthday bash, you can watch the event in its entirety including a performance by the Vanguard horn line.

Save 20 percent on Spirit of Atlanta merchandise online through the month of March.