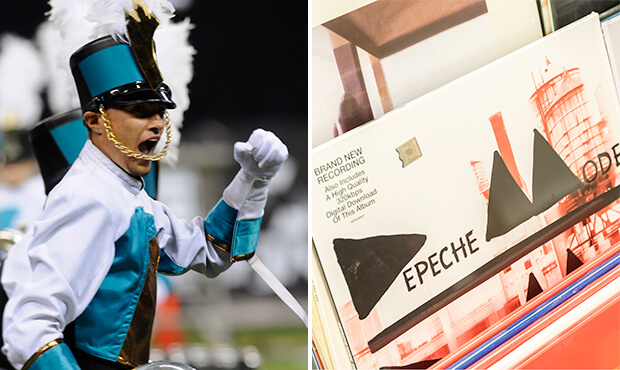 This week Pacific Crest hinted at playing a Depeche Mode tune as part of its 2015 competitive production.

• Pacific Crest hints at a nod to Depeche Mode in 2015

• Pioneer will be South Side Irish for a day

The Academy posted an update on a new equipment trailer that the corps is working to outfit.

Read up on the latest from the Blue Knights in this report from corps' chilly three-day February training camp in Denver.

Nominations are now being accepted for the 2015 class of Blue Stars Hall of Fame inductees. Submissions are due by March 21.

From cooks to physical trainers, the Cadets have a number of job openings available during the corps' 2015 summer tour.

Carolina Crown will host its CrownGOLF fundraiser on Monday, June 8, at the Palisades Country Club in Charlotte, North Carolina.

The Columbians were hard at work last weekend at Hanford High School in Richland, Washington. Check out these photos from the corps' rehearsal camp.

A Jersey Surf alum will be a competitor on a new Food Network television series that debuts Sunday, March 1, at 9 p.m. ET.

While Pacific Crest is keeping a lid on what its 2015 competitive production will consist of, the corps dropped a hint that it will include a tune made famous by Depeche Mode.

Pioneer can be seen marching down the streets of Chicago during the 37th South Side Irish St. Patrick's Day Parade on Sunday, March 15.

Santa Clara Vanguard and the Vanguard Cadets are recruiting volunteers to assist the corps during their preseason rehearsals and summer tours. Additionally, Friday is the final day to order tickets to the 48th annual Vanguard Birthday/Spaghetti Dinner coming up on Sunday, March 8.

Spirit of Atlanta appointed Brian Giddens as visual coordinator for the corps' 2015 season.

Thunder posted a new set of photos from the corps' latest rehearsal camp.