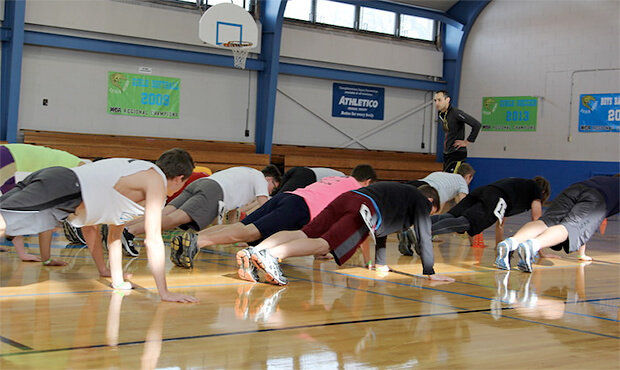 Cavaliers members work out as part of their January rehearsal camp in the Chicagoland area.

• The Cavaliers sweat it out in snowy Chicago • Blue Knights gear up for the downhill slopes • New members of the Santa Clara Vanguard Hall of Fame • And more!

The Academy This week the Academy has an ensemble performing at events leading up to and during the Super Bowl. See what the group has been up to in Glendale, Arizona. DCI.org

Blue Devils B Tickets for Blue Devils B's annual crab dinner fundraiser are now on sale. The event, which is known to sell out, features dinner, a silent auction, music, dancing and more. BlueDevils.org

Blue Knights A Blue Knights ensemble will be featured at the upcoming FIS Alpine World Ski Championships in Vail, Colorado. The ensemble will play on February 2 as part of the opening ceremonies of the series that annually draws an estimated 750 million television viewers worldwide. AscendPerformingArts.org

Blue Stars Blue Stars launched a new Facebook page dedicated to volunteers. Check it out to find the latest info about and opportunities for volunteering. Facebook.com

The Cavaliers Take a look inside the Cavaliers' latest rehearsal camp, as brass and percussion students headed to the Chicagoland area for the next step in their audition process. One of the highlights of the weekend included an introduction to the corps' physical training regimen. Cavaliers.org

Crossmen Check out these photos from Crossmen's first rehearsal camp of 2015. Facebook.com

Jersey Surf Find out what makes the Jersey Surf tick behind the scenes in this video interview with the corps' director of member experience. YouTube.com

Legends Take a look at the latest photos of Legends, captured during the corps' rehearsal camp last weekend. Facebook.com

Madison Scouts A Madison Scouts alum is honored to have been chosen to perform as part of one of the Red Carpet events leading up to the Grammy Awards on February 8. Facebook.com

Mandarins Mandarins is drumming up support for an alum who was diagnosed with Acute Myelgenous Leukemia. An event on January 31 in Sacramento will help raise support by identifying potential bone marrow donors. Facebook.com

Spartans As parts of the northeastern U.S. got buried under snow this week, Spartans issued its fans a chilly Facebook challenge—Post a "practice in the snow photo." Hilarity ensued. DCI.org

Spirit of Atlanta Spirit of Atlanta launched its inaugural Capital Equipment Campaign. Learn more about making a tax-deductible donation to the organization on the corps' Facebook page. Facebook.com

Troopers The Troopers family is mourning the loss of a 25-year-old alum who was killed in a head-on collision last Friday in East Texas. Facebook.com