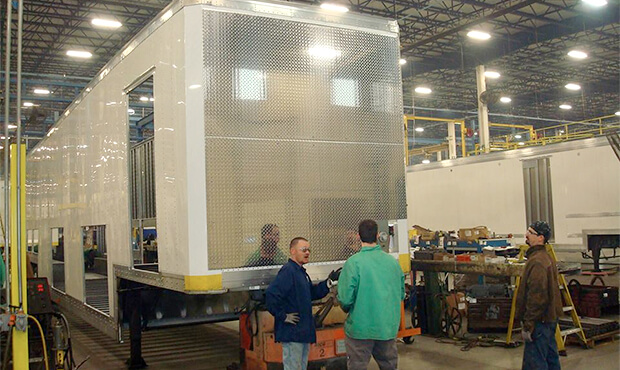 Construction on a new equipment trailer for the Blue Stars is underway.

• Blue Stars' step-by-step guide to building out an equipment trailer • Program announcements from Jersey Surf and the Guardians • Loads of photos and videos recapping recent rehearsal camps • And more!

Blue Stars The Blue Stars have been working on building out a brand new tractor-trailer that will transport the corps' equipment this summer. Check out the latest pics from the project. Facebook.com

Bluecoats See what the Bluecoats have been up to in January in a recently-posted "off-season update" video on the corps' Facebook page. Facebook.com

Carolina Crown Carolina Crown's third rehearsal camp of the 2015 season is complete. Check out this recap of everything that happened over the weekend. CarolinaCrown.org

Columbians The Columbians were hard at work last weekend at Hanford High School in Richland, Washington. Check out these photos from the Open Class group's rehearsal. Facebook.com

Guardians Guardians' 2015 production, "Light of Gold," will incorporate musical selections by Bach, Verdi and Vivaldi, among others. Facebook.com

Madison Scouts Chuck Henson, who is the longtime Bands of America public address announcer and a Madison Scouts alum, explains how you can have a screening of the "Scouts Honor" documentary in your own hometown. Facebook.com

Mandarins Mandarins welcomed students from Japan, Ireland, Colombia and the United States during its January rehearsal camp in Sacramento. Mandarins.org

Raiders Even with adverse weather conditions in the area, the Raiders still completed a productive rehearsal camp last weekend in Burlington, New Jersey. Check out these photos from the weekend. Facebook.com