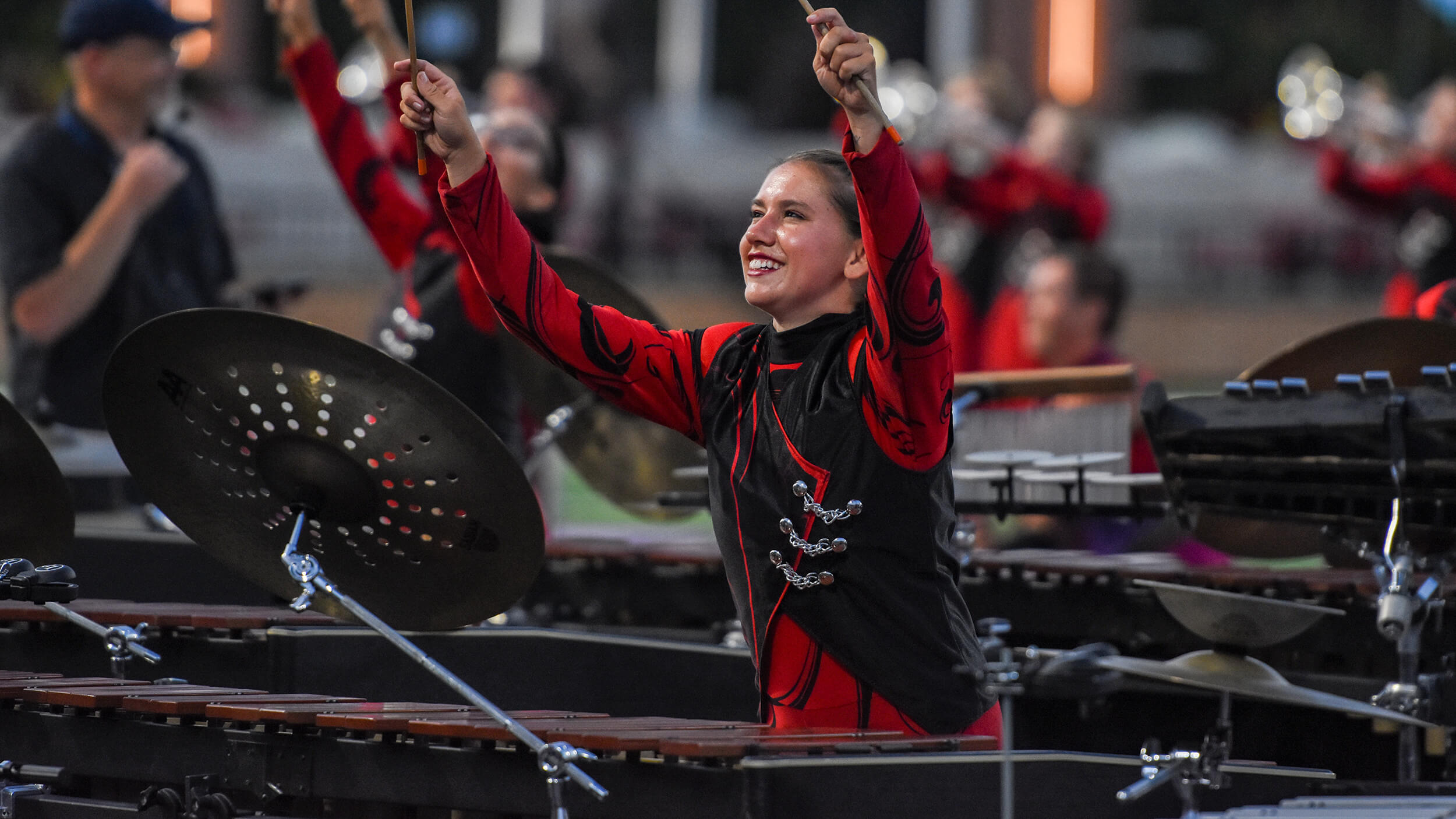 7th Regiment auditions will be conducted December 13-15 in East Hampton, Connecticut. Transportation is available from the local airport and train station.

The Academy is accepting video auditions prior to the corps’ January 3-5 callback audition camp.

The Battalion is holding an educational clinic December 13-14 in West Jordan, Utah, providing those interested in auditioning in January with an opportunity to experience the drum corps firsthand prior to the audition.

The "Inside BD360" video of Blue Devils' 2019 victory run after the DCI World Championship Finals is closing in on a half million views.

Blue Devils B auditions will he held December 14-15 in Pittsburg, California.

Blue Stars is offering free shipping on all orders of corps souveniers and gear through the end of the year.

Did you know Bluecoats has an alumni-based ensemble that plays around the Canton, Ohio year-round? Rhythm IN BLUE helps keep the corps in the public eye by performing in more than a dozen charitable and other community events each year.

Replacing Boston Crusaders’ primary equipment trailer, which has served the corps for more than 20 years, is a prime objective of the organization's 80th Anniversary Capital Campaign. $45,000 remains to be collected to finish the build-out of the new trailer.

The Cadets’ 2019 holiday ornament celebrates the corps’ 85th anniversary and is a perfect addition to any fan’s holiday tree.

Order by the afternoon of December 20 to assure your Carolina Crown gifts arrive in time for Christmas gift giving.

Stay warm this winter with some Cavaliers fleece, 25% off through December 15.

Brass and color guard may audition for the Colts in Gainesville, Florida on December 15. Brass and percussion will have an opportunity to audition December 22 in Nashville, Tennessee and December 27-29 in Dubuque, Iowa.

Take a look inside Crossmen’s recent audition and experience camp held in Houston.

Genesis will be auditioning drum majors December 13-15 at the corps’ audition event in Pearsall, Texas.

Here’s how to register for Gold’s January 4-5 audition weekend in Murrieta, California.

Heat Wave is accepting video auditions until all spots are filled in the 2020 corps.

Online materials are available for those interested in joining Impulse at the corps’ January 4-5 weekend audition camp in Westminster, California.

The next chance to audition for Jersey Surf will be December 20-22 in Sicklerville, New Jersey. This event includes opportunities for all sections and conductors.

New applicants are invited to audition for Legends the weekend of December 20-22. Positions are available for conductors as well as brass, percussion, and color guard.

DCI.org caught up with the Madison Scouts at one of the corps' first-ever gender-inclusive audition camps last weekend in Indianapolis.

Positions are available for all sections at Mandarins’ December 13-15 SoCal auditions in Duarte, California.

Music City’s holiday sale offers some impressive discounts; including $12 T-shirts and $7 off all corps pajamas.

Arcadia, California is the site of the Pacific Crest audition weekend December 13-15.

Phantom Regiment program supervisor Tony Hall is excited about the corps’ latest developments as the 2020 season comes into focus.

Prospective drummers had the opportunity to sight read a Vanguard classic during the corps' recent northern California audition camp.

Southwind auditions will be held the weekend of December 13-15, in Daphne, Alabama.

The Hollis, New Hampshire Police Department was the benefactor of one of Spartans’ trailers, utilized to transport items for the department’s annual toy drive.

Hillwood High School in Nashville, Tennessee is the site of Spirit of Atlanta brass and color guard auditions on Saturday, December 14.

Auditions for the 2020 Vanguard Cadets will be held December 21-22 in San Jose, California.

If you're interested in joining Vessel this summer, be sure to join the corps' interest group for prospective members.

Bloomington, California is the site of Watchmen auditions on Sunday, December 15. Positions are available in all sections.