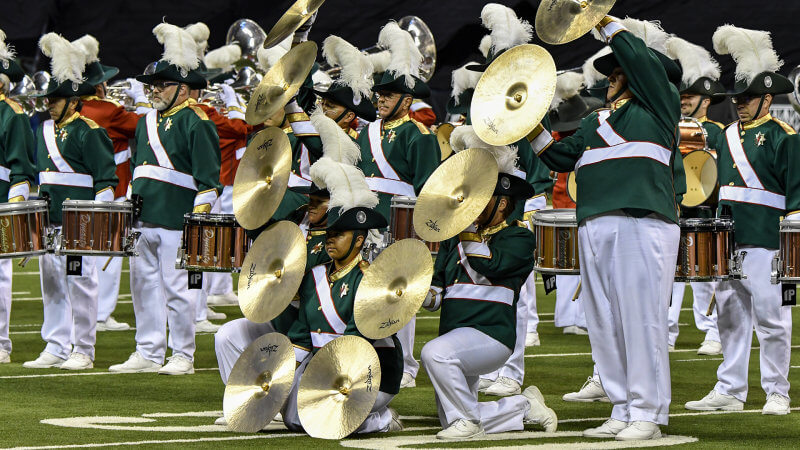 • A look back at the SCV Alumni Corps in action

• DCI Hall of Famer retires after 45 years with Phantom Regiment

7th Regiment announced its entire team of caption heads for the corps' 2018 season.

The Academy added two consultants to the corps' 2018 brass staff who will work with newly-named caption head Ben Hylton.

Bluecoats announced two key additions to its design and instructional staffs in the positions of scenic designer and color guard caption head.

Blue Knights announced the members of the corps' 2018 brass staff who will be led by caption head Chad Pence.

Brass and percussion audition packets for the 2018 edition of Boston Crusaders are now available.

Shane Gwaltney will join the 2018 Cadets in the position of design director. “We have been looking to add a new vision, a different perspective, and someone from a different genre to assist the design process,” director George Hopkins said about the new hire.

The Cavaliers named Kevin LeBoeuf as the corps' new brass caption manager. "We are simply ecstatic to merge our pedagogy and symphonic approach with the fundamental philosophies and rehearsal techniques that Kevin has employed with tremendous success,” caption supervisor Michael Martin said.

The roster of Colts' 2018 visual staff members includes the addition of Richard Hinshaw as visual designer. “"From afar, I have always admired the Colts organization for their educational values and their longstanding commitment to the best possible experience for their students,” Hinshaw said.

Previously the president of the organization's board of directors, Tom Zarate has been named the Columbians' new executive director.

Guardians announced the dates for the corps' three audition camps.

Impulse will have a recruiting booth at the October 7 marching band event at Warren High School in Downey, California.

On the heels of the corps being named DCI's newest World Class corps, Music City named Kent Baker as the corps' executive director. “The students and staff at Music City have a reputation for being not just a drum corps, but a family, one of which I'm proud to join,” Baker said.

After guiding Phantom Regiment's program design for nearly 25 years, DCI Hall of Fame member Dan Farrell will step away from the corps in 2018. “Much of the success that the Phantom Regiment has had over the course of its 60-plus years can be somehow traced back to Dan Farrell's leadership and guidance,” Regiment brass arranger Will Pitts said.

River City Rhythm announced a series of educational clinics in December across three states prior to the corps' January audition weekend.

Wrapping up the celebration of the organization's 50th anniversary, Santa Clara Vanguard took a behind-the-scenes look back this week at the accomplishments of the hundreds of alumni who formed the SCV Alumni Corps that performed this August at the DCI World Championships.

Members of Seattle Cascades enjoyed participating in the Boeing company's “Family Day,” where they were given a tour of the Boeing factory and provided color guard and percussion lessons to children of other families.

Three individuals have been voted into the Southwind Hall of Fame. They will be inducted at the annual Southwind Alumni Reunion on November 11 in Mobile, Alabama.

Longtime Spartans brass instructor Don MacTaggart has moved into the role of brass caption design for the corps' 2018 season.