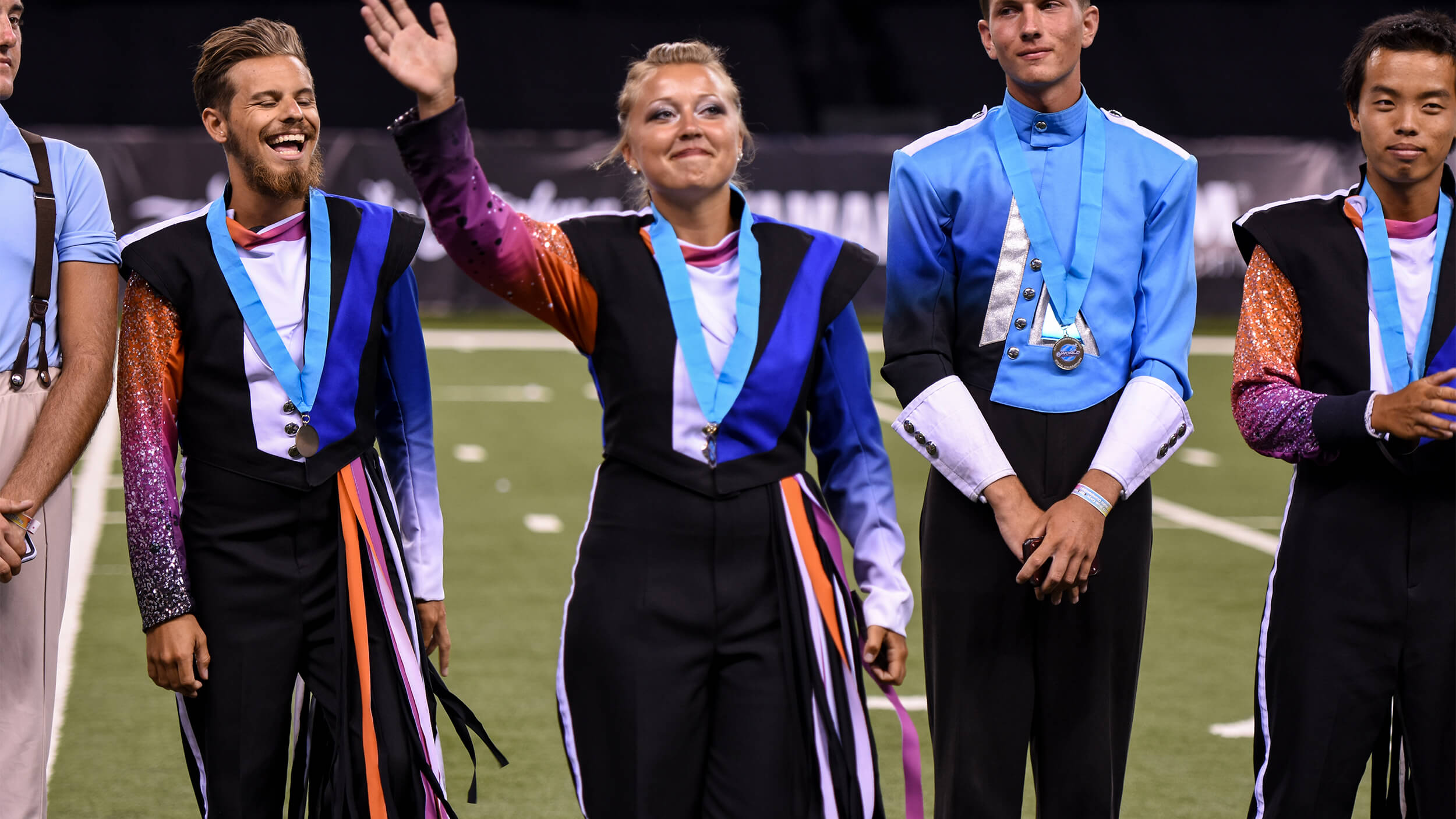 Marisa Spevak of the Blue Devils is recognized on the field of Lucas Oil Stadium as a 2015 DCI Performers Showcase champion.Photo by: Drum Corps International

In addition to Lauren Vogel Weiss (See: Paving a way to a life of percussion), there have been 11 other female percussionists who have taken top honors at the annual DCI Individual & Ensemble competition (I&E), 12 out of a possible 172 winners since 1980.

Outside of the dozens of women who have been part of winning percussion, bass drum and cymbal ensembles over the years, all but two of those 12 winners previously mentioned were also keyboard players.

After Vogel, the next female I&E champion was Martha Leeson, who won the timpani title in 1985. She served as the timpanist with the Santa Clara Vanguard from 1984-1987.

The next female “Best Individual Keyboard” was Amy Putnam, who won the title in both 1990 and 1991 when she marched as a member of the Bluecoats. Putnam is currently the principal percussionist with the Tacoma Symphony Orchestra in Washington and is president and mallet designer of A. Putnam Mallets.

There were three more female keyboard champions in the 1990s: Vivian Yea of the Blue Knights won in 1994, and Makiko Makigawa of the Santa Clara Vanguard won in 1995. In 1999, Kimberly Springer of the Phantom Regiment won the title, and also received a $1,000 scholarship from the Avant Garde Foundation as the highest-scoring percussionist of the day.

The first decade of the 21st century saw three more women winning the keyboard percussion title. Phantom Regiment’s Stephanie Womack won in 2005 with a performance of “Gordon’s Bicycle” by Kevin Bobo. In 2007, Yuki Suzuki of the Blue Devils, who was then a student at Nagoya College of Music in Japan, played Keiko Abe’s “Variations of Japanese Children’s Songs.” Two years later, another member of the Blue Devils front ensemble, Sarah Cheon, was named keyboard champion for her performance of “Ultimatum” by Nebojsa Jovan Zivkovic.

In 2007, Amanda Montemayor of the Blue Knights, earned the “Best Individual Timpani” title during her age-out year. She played “Bushido” by John Willmarth.

The past decade added two more women, both from the Blue Devils' front ensemble, to the keyboard championship list. Monica England won in 2012 for her performance of Keiko Abe’s “Marimba D’Amore.”

And in 2015, Marisa Spevak won when she played “Somewhere Over the Rainbow” by Robert Oetomo.