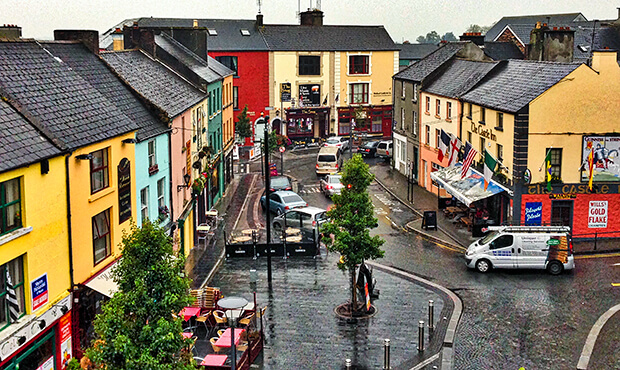 Situated about two hours west of Dublin, the town of Athlone will host Ireland's first-ever SoundSport event.
Representatives from Drum Corps International will travel to Europe this March to attend the SoundSport Athlone Ireland and SoundSport Bristol England competitive events. DCI CEO and Executive Director Dan Acheson, accompanied by Director of Business Development John DeNovi and other staff, will travel to Ireland and England to support the growth of the SoundSport program internationally. SoundSport Athlone Ireland, presented by Sean's (Ireland's oldest pub) and the Left Bank, will be the Emerald Isle's first officially sanctioned SoundSport event, taking place on Friday, March 20. This instrumental music talent showcase will feature performances by a variety of music ensembles from all over Ireland, including the hometown Ravens Drum and Bugle Corps. The event will take place against the spectacular backdrop of Athlone's historic castle along the banks of the River Shannon. "We're looking forward to an exciting night of entertainment," said Colm Bolger, the organizer of SoundSport Athlone Ireland. "This event will kick off a series of SoundSport events in Ireland which will bring a wide variety of Irish performing arts groups together in a way that's never been done before. We're very excited to be part of the growth SoundSport is experiencing worldwide." SoundSport Bristol England will take place the evening of Saturday, March 21, at the Sports Hall of SGS College in Filton, Bristol. The event is slated to start at 7 p.m. GMT, and will feature a growing number of performing ensembles to be announced in the coming weeks. "We have already received an overwhelming amount of interest from groups wishing to take part in this event," said Andy Hewlett, the organizer of SoundSport Bristol England. "Ensembles which haven't performed in the United Kingdom in nearly 20 years have contacted us looking to participate!" "We are thrilled to be able to attend these exciting events," said DCI's Dan Acheson, who last visited Europe in 2010. "SoundSport was created to provide new, exciting performance opportunities in interesting locations around the world to musicians of all ages and backgrounds. We are very pleased to see the international marching arts community embracing this program with such great passion and enthusiasm." Learn more about upcoming events at SoundSport.com.