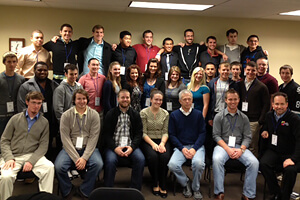 Drum majors at DCI's 2013 leadership summit in Indianapolis.
World and Open Class drum majors converged in Indianapolis, Jan. 25–27, for a leadership summit coinciding with Drum Corps International's annual winter business meetings. The fourth-annual seminar gave attending students the opportunity to participate in a series of interactive activities and discussions that were designed to hone leadership, problem solving and time management skills, all while helping them build a support network among their peers that transcends competition on the DCI Summer Tour. "We're getting to know each other as drum majors," William Veenstra of the Bluecoats said. "So when we get on the road [this summer], we have that support network where we can talk to each other ... We can communicate with the corps really easily." In total, 27 drum majors representing 23 different corps attended this year's sessions held at the Drum Corps International corporate headquarters in downtown Indianapolis. Facilitating the weekend was motivational speaker Fran Kick, along with DCI Hall of Fame members Joe Marrella and Gene Monterastelli, and a cadre of former drum majors from a number of DCI corps. Drum majors are invited to Indianapolis at no cost to the student. Drum Corps International has been collecting donations to support the drum major leadership summit through the Arts Council of Indianapolis' Power2Give program. Learn more about how you can contribute to the future of DCI's student leaders.