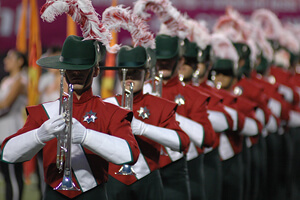 2006 Santa Clara Vanguard
During the 2006 Drum Corps International Tour, the University of Wisconsin's Camp Randall Stadium saw the DCI World Championships return for the seventh time, the first since the historic venue had been substantially modernized. The Cavaliers picked up their seventh Championship title with "Machine," a sometimes-humorous look at loveable robots that earned the corps top honors in the brass, visual and general effect captions. But only 0.35 points behind was Phantom Regiment's "Faust" program, featuring the corps' first coed color guard and first caption-winning percussion line. Santa Clara Vanguard's 6th place show, "Moto Perpetuo," was constructed around an all-original brass book composed by staff arranger Key Poulan, with percussion parts contributed by Mike Jackson and Brian Mason. In musical terms, one of the definitions of "moto perpetuo" ("perpetual motion" in Italian and Portuguese) is a musical selection or part of a selection where a continuous flurry of notes passes by at a speedy tempo. In science, it's known as the illusive and impossible theory that it's conceivable to create a machine that—once set in motion—stays in motion with no additional external help. In Vanguard's sense, the name implied that movement on the field was continuous and never-ending. The objective of keeping the drill formations moving fell to Pete Weber in his first year as drill designer for the corps. Weber, a former member of the Cavaliers, came from writing drill for the Madison Scouts the year before. Interestingly, Santa Clara's drill writer from 2005, Myron Rosander, went to Scouts in 2006 in an even trade. 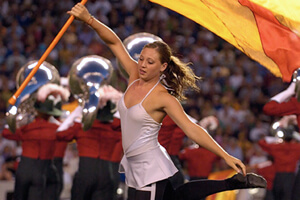 2006 Santa Clara Vanguard
A fascinating element of "Moto Perpetuo" was that someone, somewhere on the field, was always moving. It fell to the audience to find the one person who intentionally didn't stop performing when the rest of the corps came to rest, or a guard member who kept on spinning a flag or piece of equipment when everyone else stopped moving. In addition to the above, there was another element to the show that generated much attention—Mr. Moto. As soon as the corps buses pulled into a stadium's parking lot, Mr. Moto got off the bus and began to wander around the parking lot, the stadium and the souvenir area. He never once stopped moving prior to the show, kept moving throughout the show around the perimeter of the field, and stayed in motion outside the stadium once SCV's show was over. A corps member who had injured his leg during the season played the part of Mr. Moto. His character was named after the "Moto" part of the show's name, and was also a well-known name of a fictional law enforcement agent in novels and films from the 1930s on. Making lemonade out of lemons, the staff put him in the role that ultimately defined the production and created the nearest thing the drum corps activity has ever had to "Where's Waldo?" Related Content: Mr. Moto keeps going, and going, and going ... Even before the start of the show, individual members started wandering out of their respective positions in the drill formations, leading into a "big bang" set off by a single flag bearer running across the field and wrapping his flag around a trumpet player. This commenced the opening explosion of drill in "Movement 1—Chains of Reaction." At the end of the first major statement, as the horns collapsed into a box, four brass players kept rotating around a tight pivot point in the center. The four marching cymbal players would do the same thing at the very end of the movement. In between, a rotating and traveling circle of horns absorbed and dispensed corps members like a vacuum cleaner with a broken hose. "Movement 2—Newton's Cradle" (the segment in the accompanying video clip) continued the perpetual motion with a quirky jazz romp inspired by the kinetic transfers of energy of a Newton's Cradle, the scientific apparatus and popular toy where one stringed-up ball slams into another, causing the last ball to pop outward. Musically, each little jazz riff slammed into another, setting into motion the next riff and so on. "Movement 3—Echoes of Time" incorporated dual elements of brass and percussion wafting across the field in a sort of musical version of what Salvador Dali did with drooping watches in his famous painting, "The Persistence of Memory." The introduction of handbells and a stylized silvery "V" on the luminous blue flags helped provide an otherworldly sense to this musical respite, with no pause in the music leading into the final segment. 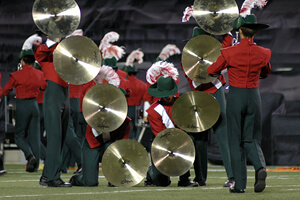 2006 Santa Clara Vanguard
"Movement 4—Speed of Sight" was agitated and frenetic, leading into a brass chorale played facing backfield interposed upon by a long series of triplet-then-16th note runs by the mallets in the front ensemble percussion section. During a sudden brief pause in the music, an audience yell of "Vanguard!" led into the brass players collapsing into a block triangle for the final standstill shout, a quite loud exclamation that could have put the final stamp of approval on the show. However, there was still more to come. After a quick sequential turn to the back, the triangular block of horns morphed into a block diamond, with the horns commencing the tracing of an invisible hourglass from the back (closest to the stadium) forward to the front of the form (nearest the left rear sideline). This evolution swarmed around the four marching cymbal players, who were doing unusual things with their cymbal plates. One of the most captivating actions was when they tossed their cymbals toward the ground and let the plates (attached with bungee cords) pop back into their hands. The cymbals then knelt and etched their trademark Vanguard "V" as Mr. Moto approached, opening up just wide enough for him to pass through before turning around and following the corps into the upper left of the field. Mr. Moto, upon leaving the field, continued on with his mission, extending the show into the parking lot and letting people know the show was still spinning around somewhere in space, like the radio and television waves that may some day bring those productions of "Mr. Moto" from decades ago to sentient beings in other galaxies.