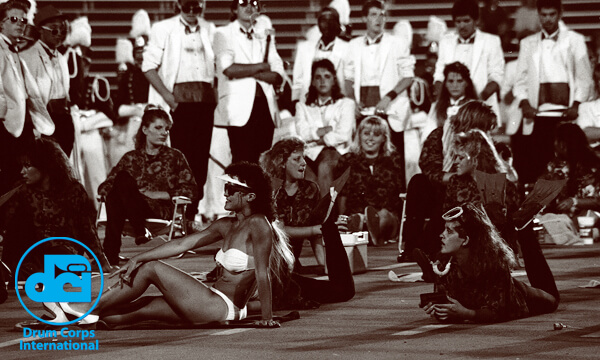 Velvet Knights kicking back at Madison, Wisconsin's Camp Randall Stadium during the finale of the 1987 DCI World Championships.

Straight out of Southern California with a casual surfer-style attitude unlike any ever seen in the rank-and-file of Drum Corps International, VK took the field in 1987 by storm. With corps members in red Converse sneakers and baseball caps, a bikini-clad sunbather, and color guard members doing a kick-step routine in scuba fins and snorkels, VK's "Magical Mystery Tour" turned the drum corps activity on its head.

Ending the summer in seventh place, 1987 marked the corps' highest finish ever in its eight years as a World Class finalist. The corps would stay active through 1996 before disbanding.

Read more about the 1987 Velvet Knights.