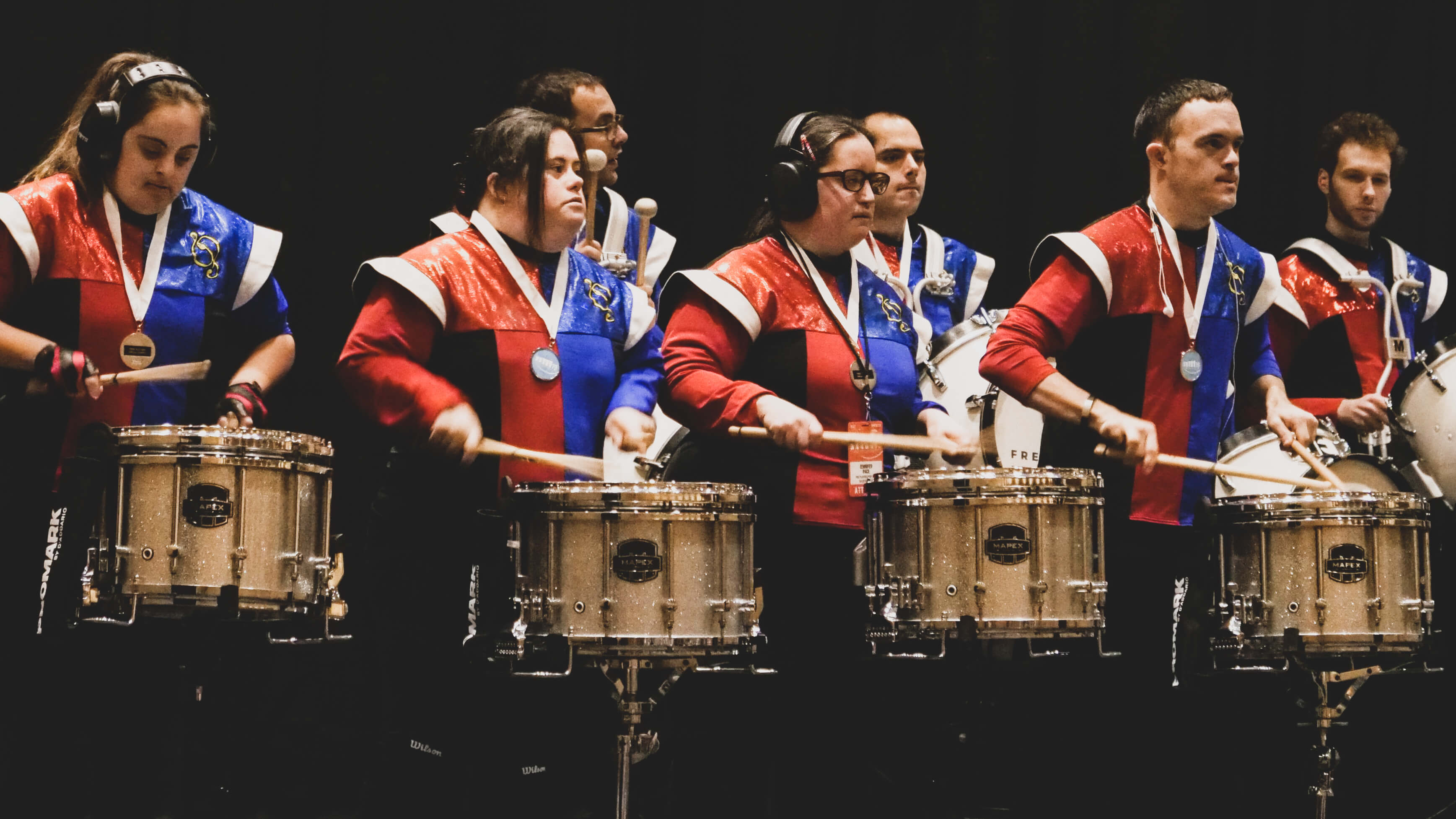 Members of the FREE Players perform as part of the 2019 Percussive Arts Society International Convention.Photo by: Drum Corps International

Every morning, when he sits down in his office, Brian Calhoun sees evolution take place right before his eyes.

That’s by design. He has 10 photos displayed prominently — one for each of the last 10 years, in chronological order — of the FREE Players Drum and Bugle Corps.

The saga starts with a small handful of differently-abled musicians, and develops into a full-fledged drum corps — the first of its kind — performing at prestigious marching music events on a national scale.

Visually, it’s a quick progression when Calhoun, the corps’ founder and director, pans across the series of photos from left to right. But in reality, it’s been a steady growth process.

Regardless, the process has taken FREE Players to new heights, the most recent of which included a performance and educational clinic at the 2019 Percussive Arts Society International Convention (PASIC) in downtown Indianapolis.

“What a tremendous honor to be asked by PASIC to come here and have the opportunity," Calhoun said. "Not only to do a performance and share our members’ talents, but also share our members’ story, how we were founded, and where we are today and the journey that it’s taken to get there.” 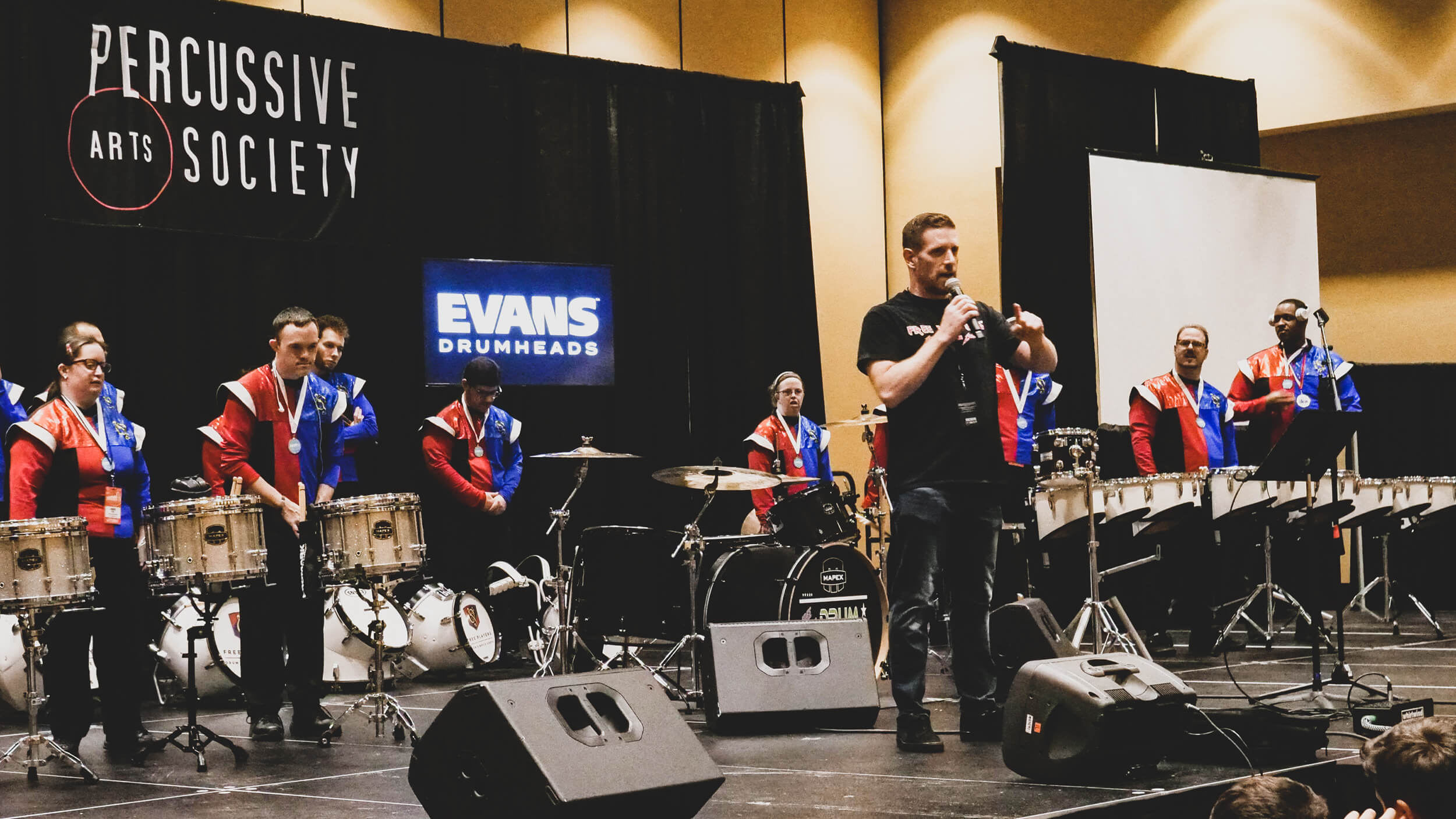 FREE Players director Brian Calhoun on stage during his group's performance at PASIC.

The annual convention, which brings together all faces and facets of the percussion universe, was held November 14-16 at the Indiana Convention Center, but FREE Players’ main contributions took place on the latter two days of events.

The clinic itself allowed FREE Players’ percussion section to present some of its talents, the members to share some of their personal stories, and Calhoun to share the overarching story, future goals and needs of the ensemble.

In that vein, FREE Players’ time at PASIC wasn’t necessarily better or more meaningful than its many other accomplishments — which include appearances at the championship events of Drum Corps International, Winter Guard International (WGI) and Drum Corps Associates (DCA) — but it was definitely a different experience. 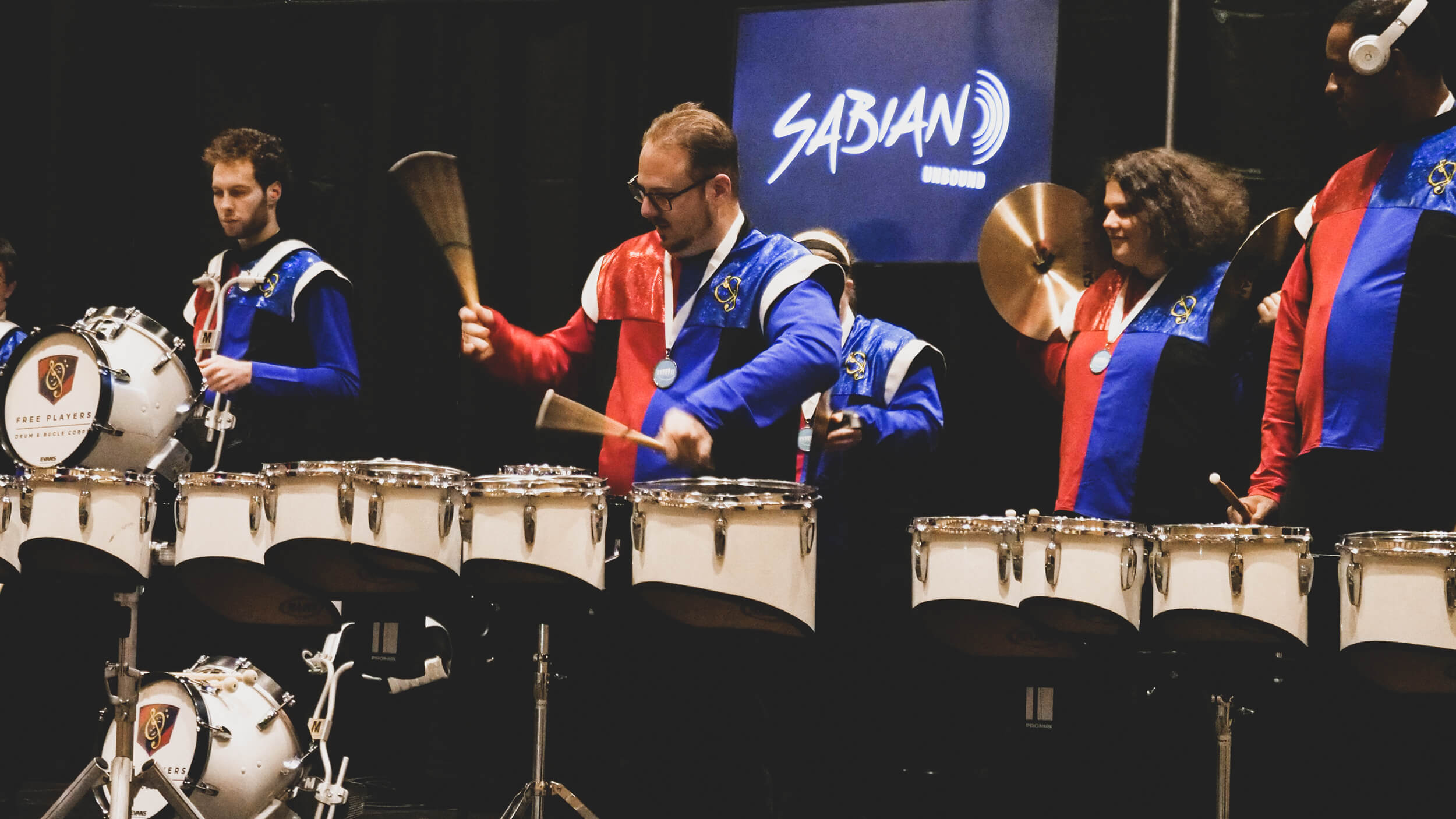 Members of the FREE Players drum line lay down a beat.

“A lot of times, at DCI and WGI and DCA, those are amazing events, but you see the finished, polished product,” Calhoun said. “Now, we got to share how we actually got there. Not only was I able to share my story, but some of the members were able to share theirs.”

Furthermore, the convention allowed FREE Players to develop an audience beyond the four walls of marching music.

With PASIC encompassing all sides of the percussive world, FREE Players’ message — which has already created undeniable shockwaves in the marching music community — was able to reach a whole new audience.

“It’s marching, it’s concert, drum set, and some of the top people from not only drums and percussion but the entire music industry are here,” Calhoun added. “So, it’s really opening us up to a broader audience, and that’s definitely where we want to go in the future.” 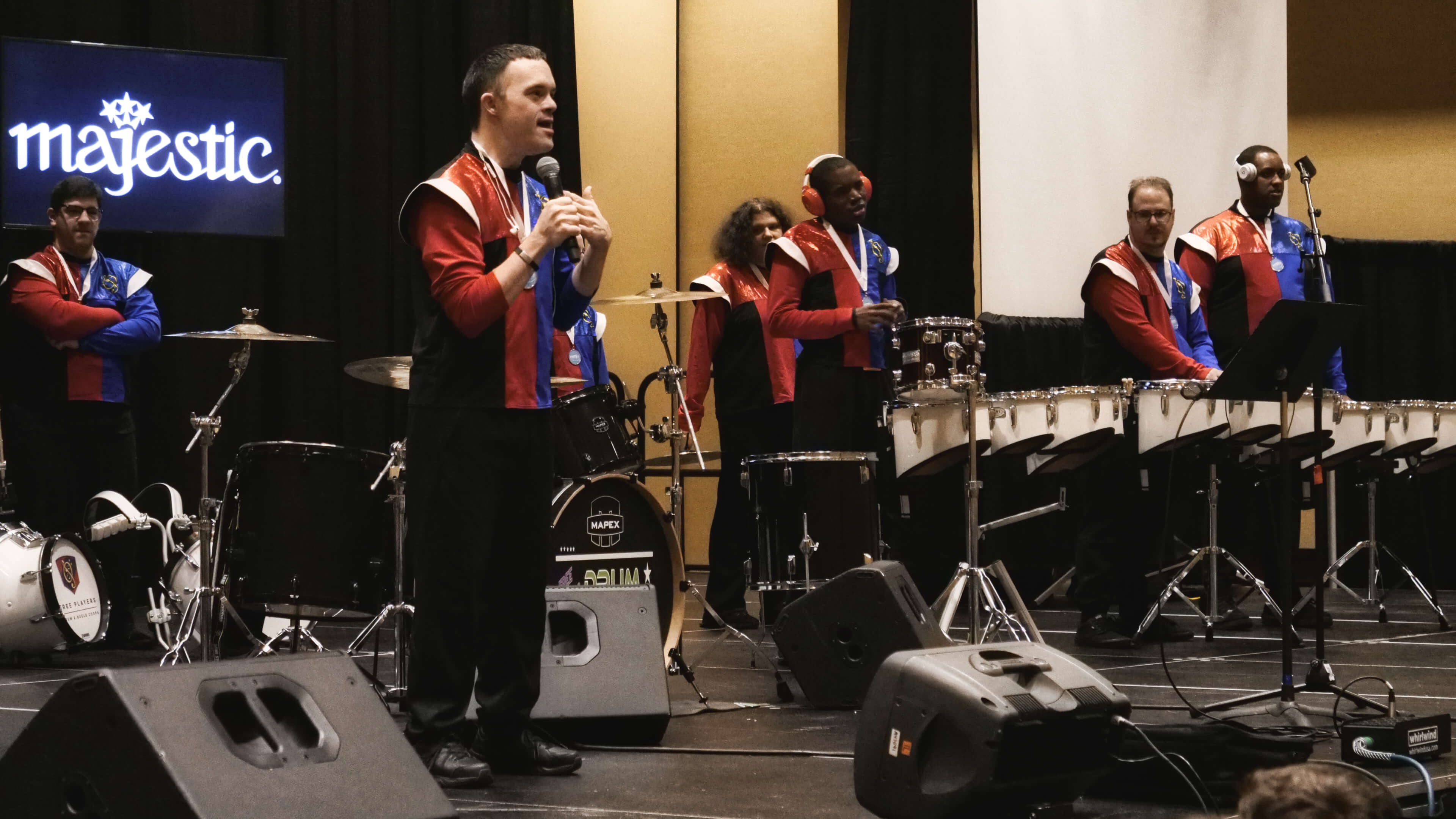 A member of FREE Players shares his story during the corps' session at PASIC.

With a new audience, Calhoun’s hope is that some of his bigger dreams for the FREE Players organization can gain more traction and eventually get off the ground.

He’s not shy about where he sees the corps headed and where he wants it to end up. Visions of working with professional sports teams and even shows like "America’s Got Talent."

And Calhoun noted that possibilities on the same wavelength as those have been in the works, but have yet to take hold. He knows the opportunities are there.

“We’re hoping that PASIC will help us springboard into those things that we’re hoping to pursue,” he said. “I’m hoping this will open that door, because I can see it happening. There’s been so many offers in the last few years, it’s amazing, but nothing has come to fruition.”

He also mentioned the hope of one day creating a FREE Players unified ensemble of sorts, one that allows members with and without disabilities to perform and compete in the same unit. 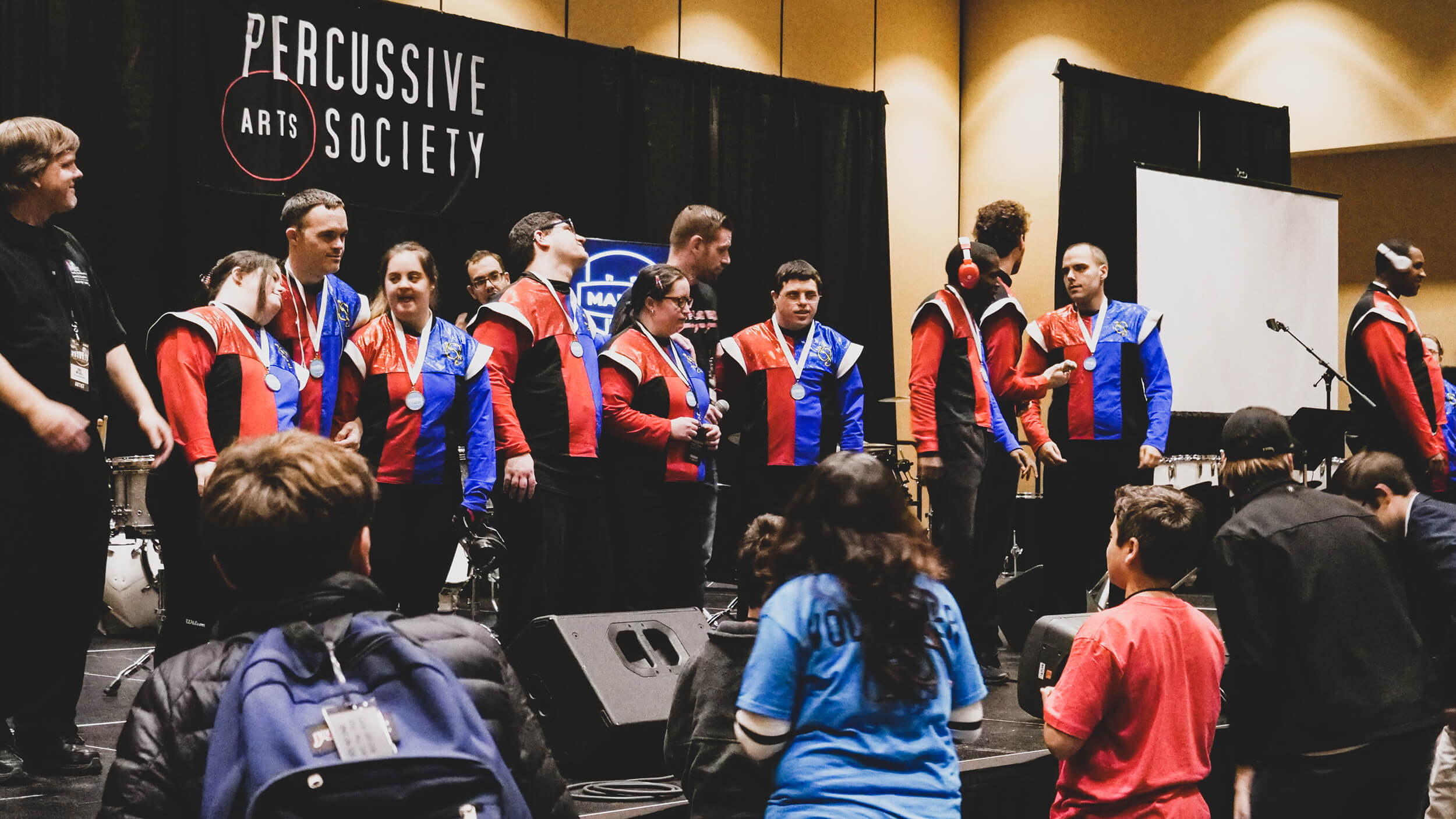 “A lot of our staff can teach at a very high level, not only people with disabilities, but high school students, college students or even adults at a high, professional level,” he said. “We’re hoping to develop a FREE Players unified team that can actually go out there and legitimately compete, breaking down boundaries and barriers together one beat at a time.”

All in all, such dreams are lofty. But 10 years ago, dreams of appearing at the DCI World Championships probably seemed even loftier.

It’s yet to be seen what the next ten will look like; the corps will officially celebrate its 10-year anniversary in February, with a forward focus in mind.

But if one thing’s for sure, it’s that FREE Players will continue to provide life-changing opportunities in music for a community that is rife with talent and drive.

Learn more about the FREE Players